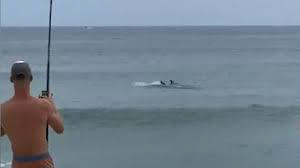 A great white shark living in Nauset Beach, off of Cape Cod, got himself or herself some dinner, on Sunday, after a fella by the name of Matt Pieciak left his fishing rod dangling in the water as he enjoyed a day on the beach with family and friends.

“There’s no chance the hook I was using for the fish would have even grabbed the shark,” is what the WCAX folks quoted Matt Pieciak as saying.

Matt Pieciak was enjoying himself a beer and a game of cornhole when he got up and looked behind the fella, who he was playing cornhole with, and saw his fishing rod bobbing up and down in the water.

“I just saw the rod kind of start to go off behind him. The tip of it was bending, and from there, we just kind of ran over to it,” is what the WCAX folks quoted Matt Pieciak as saying.

Matt Pieciak said that he took a second look and saw the sun illuminating the shadow of Jaws’ cousin in the water. Others folks saw it too because they, according to Matt Pieciak, came running to see the fearsome beast of the ocean.

The great white shark didn’t pay any of them any never mind, though. He or she just got his or dinner and then went on about his or her business. No word yet on what type of fish the great white had for lunch!...Oh wait, here’s something from Doby Jr. who is the son of Doby the Shark from Anchorman 2: The Legend Continues. 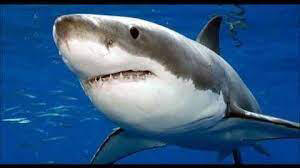 Yeah, I was just hanging out with a couple of my friends, working up a sweat on the waves while showing off some fin to the ladies. And then I was like, dudes, “The lion is growling! I better get some grub.” I headed out north where all the best food from bass, Bluefin tuna, to humans are.

Several miles out, I smelled humans. I thought about taking them over to be lunch for my friends, but then the lion’s growl reminded me that I didn’t have the energy to bag up the human lunches on the boat.

Luckily for me, though, the humans were too busy with each other to notice that a bass was flopping around on a long stick they had in the water.

So, I grabbed the bass and headed back!