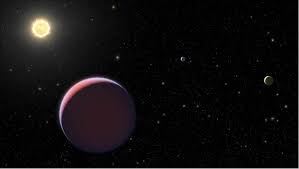 Who would’ve thunk it?! There are three Earth-like planets orbiting around a young sun.

With the help of NASA’s Transiting Exoplanet Survey Satellite (TESS), a group of astronomers found three Earth-like planets in a river of stars forming the Pisces-Eridanus stellar stream.

The Pisces-Eridanus is very, very young, just 120 million years old. And being as young as it is, Pisces-Eridanus has a lot of spunk, a lot of life that makes it ripe for producing life. “This system checks a lot of boxes for astronomers. It’s only 120 million years old and just 400 light-years away, allowing detailed observations of this young planetary system. And because there are three planets between two and four times Earth’s size, they make especially promising targets for testing theories about how planetary atmospheres evolve,” is what the CBS News folks quoted lead researcher Elisabeth Newton as saying in her statement.

Out of the 4,000 know planets hanging on the outside of our solar system, scientists have only found seven systems that have several transiting planets. Whenever a planet or an object in space transits another planet or object, it moves in front of it. A solar eclipse is an example of this. During a solar eclipse, the moon moves in front of, transit, the sun.

Scientists view this transiting business as very important because it helps them to determine important information about a planet like its size and orbit. Think Kepler’s Laws and all of that good stuff and how it comes into play. “By studying these planets in the context of others, we can piece together the picture of how planets form and develop,” is what lead researcher Elisabeth Newton told the CBS News folks.

The one thing that is for sure, though, is that Earth has competition.
The three planets have youth on their side which means the planets will go through planetary changes that may very well make the planets evolve into a bigger, better, and stronger earth.

Then there is the planets’ sun moving around, like a solar cheetah, on its axis every 5.1 days compared to our tortoise like sun that takes 27 days to make it around its axis.

Due to the planets and the young sun being in their teenage phase of planetary and solar development, Elon Musk and his buddies won’t be able to voyage to the three earth-like planets anytime soon.

Hey, maybe that is what is going on, here! The universe realizes that it won’t be too long before our planet is uninhabitable so the universe is making three new inhabitable planets for us to mess up.

The universe is so cool and thoughtful!