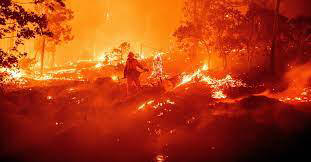 
Cal Fire did say that someone would
be held criminally responsible for
starting the El Dorado Fire that left
one firefighter dead
by Nathan'ette Burdine: July 27, 2021
Tweet
Follow @nbnylemagazine

Y’all remember when the Desert Sun folks quoted the Cal Fire folks as saying, “Those responsible for starting fires due to negligence or illegal activity can be held financially responsible and criminally responsible,” after the El Dorado fire left 13 people hospitalize and one firefighter dead?

The “those” who are being “held financially responsible and criminally responsible” are Refugio Manuel and his wife Angela Renee Jimenez. The husband wife fire starting team have been charged with one count of felony involuntary manslaughter in the death of a firefighter who succumb to his injuries while fighting the El Dorado Fire that was caused by the Jimenez’s gender reveal party.

The couple is also facing several other felony and misdemeanor charges and fines, and prison time related to the fire that burned over 10,000 acres, left 13 people with hospital bills, and caused millions of dollars in property damage.

The husband and wife fire starting team have pleaded not guilty. And they more than likely pleaded not guilty because they believe the pyrotechnics should be standing trial for its decision to work in tandem with the triple digit heat in order to start a fire that led to millions of dollars in property damage, the hospitalization of 13 people, and the death of a firefighter.

If only the pyrotechnics and the triple digit heat weren’t so ornery on that day, everything and one would be on the up and up. Welp, due to Refugio Manuel and his wife Angela Renee Jimenez not knowing that it is safer and cheaper to reveal their creation’s gender with a baby shower, they are both facing a felony involuntary manslaughter charge and several other felonies and misdemeanors.

The Jimenezs are up a creek without a paddle.