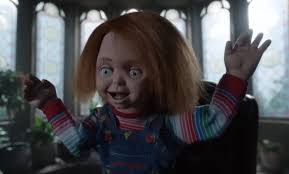 
Chucky promises tears and fears
and the piss being scared out of
you whenever you watch Chucky
season 2
by Nathan'ette Burdine: October 2, 2022
Tweet
Follow @nbnylemagazine

Chucky is a man doll of his word who knows that the one thing you need and want is not to be entertain, as Saturday Night Live (SNL) and Nicole Kidman and AMC think, but to have the piss scared out of you.

.@nbcsnl i did it better pic.twitter.com/bC4hNiUQ3A

You want it! You know you do! You love lying down on your mama’s couch in the fetal position, in the dark, nestled up with your Winnie the Pooh and Care Bear teddy bears shaking so that your bones start playing a song.

It’s, as Chucky describes it, “that indescribable feeling of fear you get not knowing if I might be right behind you. Hehehe, made you look.” You looked! You know you did! You even looked at Winnie the Pooh and the Care Bears because you think Chucky has taken over your stuff animals.

No worries, though. Chucky likes plastic, not cotton.

Don’t forget to watch season 2 of Chucky on Wednesday at 9PM EST on USA or SYFY!