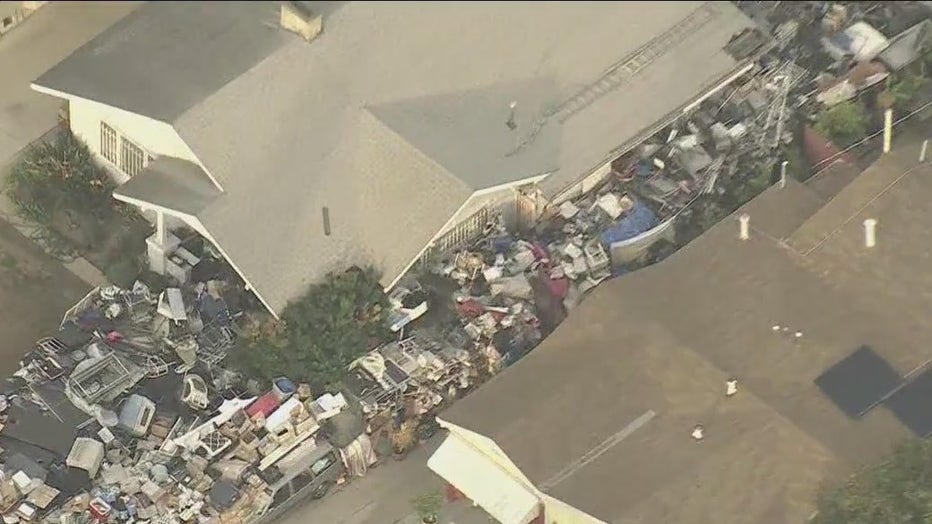 
City of Los Angeles is cleaning up
home that has been cited for code
violations for over 11 years
by Nathan'ette Burdine: November 6, 2021
Tweet
Follow @nbnylemagazine

On Thursday morning, the City of Los Angeles began cleaning up the outside of what many neighbors describe as the house of horror hoarders home. There’s everything from laundry baskets, sofas, mattresses, to stoves and ovens circling around in the front yard. “I’m just finally glad that something is being done about it. The only major concern I have right now is once we start removing these things, and all the nasties that they were in there start to come out. Hopefully, they don’t migrate to our house,” is what Edward Lim told the Fox 11 LA folks.

Folks, let’s be honest, the son sounds like a stereotypical young buck who trashed up his mama’s house. There are sofas, stoves, ovens, and other whatnots in his mama’s backyard.

Y’all have seen it before. Y’all know it’s true. Now, it’s quite certain the son and mother will deny the claims, but if the shoe fits.

The city attorney says they’ve been working since August 10, 2021, to resolve the problem. “Ever since this location was first brought to our attention in late August, 10th Council District team has actively engaged the Fire Department, Building and Safety Department, City Attorney’s Office, as well as appropriate County agencies and neighbors, in an effort to bring swift resolution to this concerning matter,” is what the FOX11 LA folks quoted the Chief of Staff of the 10th District City Council Karly Katona as saying in a statement.

Considering this has been a problem since 2010, neighbors, like Letecia Ruiz, say they wish the city had been Johnny on the Spot in addressing the issue some 11 years ago. “I’m so happy and grateful, but I feel sad it took the city so long to help us,” is what the FOX11 LA folks quoted Letecia Ruiz as saying.

Mm-hmm, bureaucracy is bad for the public’s health. Mm-hmm.