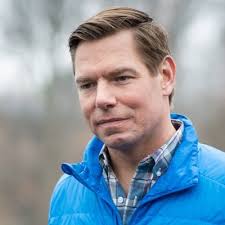 
Eric Swalwell becomes the first
of the 24 Democratic presidential
candidates to drop out of the race
by Nathan'ette Burdine: July 8, 2019
Tweet
Follow @nbnylemagazine

Welp, Eric Swalwell gone! After trying to have “the bold without the bold,” the distinguish congressman from the great state of California decided he’d be the first of the 24 Democratic presidential candidates to drop out of the race.

“I was running to win and to make a difference…but I also promised my family and my constituents that I’d be honest about our chances,” is what the young man, who wants all of the senior citizens running to pass the torch to him, told CNN’s Erin Burnett during her show Out Front.

Lil’ Eric is 38 years old whereas the other candidates’ ages range from their early fifties to late seventies. Their extensive time on earth gives them a perspective on life that lil’ Eric can only wait to have.

Sorry young bucks, but knowing how to tweet, post Instagram photos, and uploading videos on YouTube doesn’t give a person the necessary qualifications he needs in order to be the next president of the United States.

I know, I know, I know…Ol’ Donald John Trump Sr., isn’t qualified to occupy the office of the president of the United States either. But, Donald Trump, like Joe Biden and Bernie Sanders, has been on this planet a long, long time. In fact, they’ve been here so long that they’re senior citizens. And those senior citizens always have more than a few tricks up their sleeves; which lil’ Eric and his generation have yet to learn.

Don’t get me wrong, now. I’m not saying all of the tricks are good because Donald Trump did join forces with Russian President Vladimir Putin, allegedly, in order to become number 45. As bad as that is, though, you gotta admit that Donald Trump wouldn’t’ve been able to pull off that tric, allegedly, if he didn’t have more than a few tricks up his sleeves.

Therefore, lil’ Eric got a ways to go before he learns how to successfully join forces with a foreign adversary in order to steal a presidential election. Allegedly.

Oh yeah, before I forget, lil’ Eric turned off a lot of folks when he started talking about giving the federal government more of an authoritarian role in enforcing the 2nd Amendment.

“And so I’m not confiscating anyone’s guns, but my plan does say that if you have an assault weapon you will have to sell it back to the government. Or, only use it at a shooting range or a hunting club.” Yeah, that there, what he told CNN’s S.E.Cupp, ain’t cutting it. Because at the end of the day, lil’ Eric is saying that he’s in favor of the federal government telling folks what to do with their guns. And y’all know the feds, it’s guns today and free speech tomorrow.

The one thing I know that we the American people are united on is knowing that neither the state or federal government can tell us what to do with do. So yeah, lil’ Eric just wasn’t going to make it.