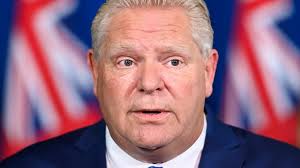 Folks, if y’all are heading up north ways to a city, like Toronto, which is located in Ontario, Canada, then y’all need to be mindful of the fact that Premier Doug Ford’s government has given the police the right to stop you from hanging out with your buddies if they suspect you of trying to go somewhere to hang out with your buddies.

If you so shall decide not to comply, then it will cost you $750; which is more than likely the cost of your hotel room. So yeah, not complying could lead to you being out of room and board money for the hotel. Doug Ford and his crew will say this isn’t as bad as it sounds considering the fact that they wanted the police to just stop folks for just being.

In other words, Doug Ford was going to use the coronavirus pandemic in order to allow the police to stop any Joe or Jenny who they saw moving around and about outside and then ask them for their home address in order to keep better tabs on their comings and goings.

The Police, though, don’t like that idea. The police know the public would have their heads on stakes if they enforce such authoritarian tactics that would have been used on all people coming in and out of Ontario’s borders. Everybody from the young, the old, the women, the men, the blacks, the whites, the poors, the richers would have been stopped. Heck, even the police would have stopped the police.

Y’all know I’m telling the truth! The police don’t want to deal with that because it will place them in several uncomfortable positions to arrests folks who they know shouldn’t be arrested.

Seeing that the police are just nah about all of that, Doug Ford decided he better compromise by allowing the police to do what they do best which is stopping random folks on the street who look like the “social gathering” type.

Y’all know the “social gathering” type. They are the hippies, the blacks, the “Mary Jane” lovers, and the “I just finish college” looking folks. The police, though, have decided they don’t want that ol’ bag because it will get in the way of them doing what they really want to do which is to chill.

Mind you, now, just because the police don’t want to do more work than what their middle-class salary requires them to do, it doesn’t mean that you, who hails from the great U.S. of A, won’t be profile by the police as one of the “social gathering” types who Doug Ford says is ok for the police to question on your way to your social gathering.

Therefore, if you can’t afford to take the $750 risks of being identified as one of the “social gathering” types, then it’s best that you stay right here, in the great U.S. of A, where you can freely do all of the sight-seeing that you want from the comfort of your couch.