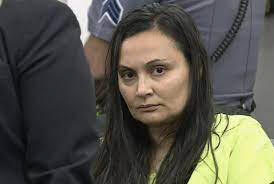 
Letecia Stauch pleaded not guilty
to the slew of charges she’s been
hit with in the death of Gannon
Stauch
by Nathan'ette Burdine: November 5, 2021
Tweet
Follow @nbnylemagazine

Yesterday, during an appearance before Judge Gregory Werner, Letecia Stauch pleaded not guilty to the slew of charges, which includes first degree murder, she’s been hit with in the death of 11-year-old Gannon Stauch.

Letecia Stauch is accused of beating Gannon Stauch with his Nintendo Wi remote, stabbing him, shooting him, and then driving across several state lines down to Santa Rosa County Florida to dump his dead body down in a hole.

After throwing 11-year-old Gannon Stauch’s body away like yesterday’s trash, Letecia Stauch then treated herself to a nice vacation in South Carolina. The police caught up with her, arrested her, and charged her with several crimes. Being the alleged murderess that she is, Letecia Stauch did what all accused criminals do which is to play the ol “Cuckoo Bird” game.

Due to the court being hip to that game, they just went ahead and played her at her game. Beginning on March 28, 2022, Letecia Stauch will sit before a jury of her peers who will decided whether she is what she wants us to believe she is, which is not guilty.

Letecia Stauch will also have to face 11-year-old Gannon Stauch’s parents who were present in the courtroom on Thursday when Letecia Stauch entered that “not guilty” plea of hers.

The lil’ fella’s mother and father were wearing blue which is the color people wore last year during the search for the lil’ fella.