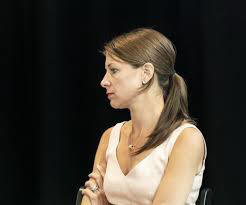 
Melissa DeRosa says an emotionally
and mentally trying two years are
the reasons why she has resigned
as the Secretary to the Governor
of New York
bby Nathan'ette Burdine: August 9, 2021
Tweet
Follow @nbnylemagazine

The last two years have been especially hard on Governor Andrew Cuomo’s now former Secretary to the Governor Melissa DeRosa.

“Personally, the past 2 years have been emotionally and mentally trying. I am forever grateful for the opportunity to have worked with such talented and committed colleagues on behalf of our state,” is what Melissa DeRosa, according to NY1's Zack Fink's tweet, said in a statement.

The times became “emotionally and mentally trying” for the Melissa DeRosa after she decided that stonewalling the sexual harassment and assault complaints against Andrew Cuomo, while also backyard burying the COVID-19 nursing home data in order to help the governor to ink a $5 million book deal about his “groundbreaking” COVID-19 response, was the best way for her to continue getting the “perks” of being the governor’s “right hand woman.”

And who can blame her?! Anyone with a lick of sense would have seen the opportunity that Governor Andrew Cuomo had so graciously given to her as a “golden” ticket to place her on the road to becoming something like his White House Chief of Staff.

It’s not like it’s too far fetch to think it. Folks were, after all, talking about how the “Empire State” gov could become the fifth president behind Martin Van Buren, Grover Cleveland, and the two Roosevelt cousins Teddy Jr. and Franky D. to have also served as the governor of New York.

If such a thing did occur, then it would have only been reasonable for Andrew Cuomo to do what all politicians do which is to keep the person he most trusted close to him. And the person he most trusted to keep the victims of his alleged sexual harassment and assault at bay, while feeding COVID-19 nursing home data to the fish, is the same person he would trust to guard the “White House gates” if he had become the president of the United States.

Oh well, sucks for them!