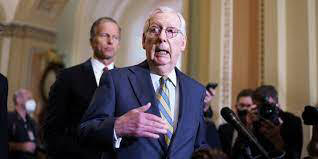 Senate Minority Leader Mitch McConnell (R-KY) tells the Republicans that they can’t impeach a Democratic president who has a Democratic control Congress backing him.

Ol’ Mitch, there, had to come out to say the obvious because there are Republicans, like Senators Lindsey Graham (SC) and Josh Hawley (MO) and Rep. Marsha Blackburn (TN), who believe the public’s dislike for President Joseph R. Biden’s not so good handling of the exiting out of the U.S.’s 20-year war in Afghanistan is all the Republicans need in order to bring some House Democrats and Senators onboard to push ol’ Joe overboard.

A Pew Research poll shows that 42% of Americans have given ol’ Joe a thumbs down for his handling of the withdrawal compared to the 26% who have given him a thumbs up and the 29% who are like, “It’s so so.”

The Republicans looked at all the thumbs down and were like, “Joe got to go.” Being the political tactician he is, ol’ Mitch, there, knows that the situation is more complicated than thumbs up or thumbs down.

He knows that the Republicans also have to deal with their image of being warmongers who put the country in a 20-year-war that Americans said America never should have been in and a war a Democratic president got America out of will do nothing but put the Republican Party on the wrong side of the American people.

Mitch McConnell doesn’t want to be in that boat. Unh-unh! No sir! He knows that his trying to get a Democratic controlled Congress to support the congressional Republicans’ efforts of impeaching and trialing a Democratic president over his bad handling of a withdrawal from a war that a Republican president and Republican control Congress put the country in and a war Americans wanted out of will do nothing but give the Democrats the cattle prod they need in order to get their constituents to the polls to do in history what has rarely been done which is to keep the sitting president’s party in control of Congress after the mid-term elections.

And Mitch McConnell can’t have the Democrats maintaining power over Congress because that means he won’t have the words Senate Majority Leader behind his name again.

Therefore, ol’ Mitch, there, isn’t going to do anything to help the Democrats maintain power that history says will be in his hands in 2023.