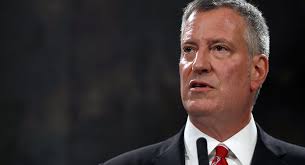 
New Yorkers agree that Bill de Blasio
running for president is bad
for everybody
by Nathan'ette Burdine: May 19, 2019
Tweet
Follow @nbnylemagazine

I know New York City Mayor Bill de Blasio has no business running for president of the United States because his own people up there in New York say he should just stay at home and watch Netflix all day long.

As a matter of fact, Bill de Blasio never peaked above 30% with any group that was asked if he should just let running for president be.

The Hispanics was the group that gave him the 30%. To be honest with y’all, I think they did that because they felt bad for him and decided they’ll give him a courtesy boost.

Bill de Blasio, though, ain’t paying any of that any never mind. Bill de Blasio was all smiles when he walked into Good Morning America with the bad news to America announcing his run for president and how he claims he’ll put “working people first.”

Weeelll, the po’ po’ and the po’ folks formed a crowd outside of the Good Morning America studios telling folks that Bill de Blasio is a “Lying Will” who is “no friend to labor.”

Bill de Blasio tried fake smiling it off. But, he couldn’t. He couldn’t smile away the fact that the people of New York were warning us that a mayor who can’t run a major city like New York will not be able to run the United States of America as president.

Unfortunately for Bill de Blasio, the American people are listening to the people of New York.