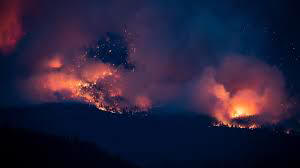 
Over a majority of the new fires
in British Columbia were caused
by lightning
by Nathan'ette Burdine: July 9, 2021
Tweet
Follow @nbnylemagazine

Over a majority (greater than 66%) of the new fires, according to the BC Wildfire Service folks, were caused by the lightning.

The lightning, of course, isn’t taking all the blame for lightning up British Columbia’s terrain like a Jamaican Juke Hall Joint.

Mr. Lightning says that y’all need to look at the heat and the low humidity as the main ones causing British Columbia to be on FIRE!

And Mr. Lightning wants y’all to know that the heat and the low humidity had a role in British Columbia being on FIRE!

Mr. Lightning is right!  It has been as hot as Satan’s toenails and as dry as an empty well throughout the North American Continent.

From California all the way up to British Columbia, cut across to Ontario and into New York, the temperatures have range from the 90s to the 120s.

There are folks who say the excoriating heat is proof that climate change is real, while there are others who say it suppose to be hot, hot, hot because it’s the summer.

The one thing that is certain, though, is that if folks don’t won’t to deal with the pricey costs of all this heat, then they better start investing in a stronger air condition system and pay their fire people more money to fight these fires that on FIRE!