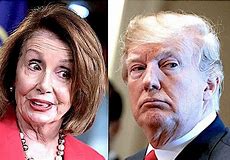 This is somebody else's photo


Pelosi's letter to Trump inviting him to
give the State of the Union Addres is
just her way of triple dog daring him
to shutdown the government again
by Nathan'ette Burdine: February 5, 2019
Tweet
Follow @nbnylemagazine

Case in point, Pelosi’s letter to Trump inviting him to the House to give the State of the Union address before he uses the option of shutting down the government again on February 15, 2019, is just Pelosi’s way of saying, “Please, please, please do it. Just do it!’

Come on now, y’all know Trump is going to shutdown the government again! Trump’s been going around telling everybody that shutting down the government is “certainly an option” if he doesn’t get the funding from Congress to build his border wall.

Before y’all go calling Trump everything but the child of God, just know that the only reason why ol’ Donald John is willing to shut the government down again is because of the number of Republicans who support him shutting down the government in order to get funding for his border wall.

Trump has to keep his Republican base if he wants a second term as the president of the United States.

Right now, the Democrats have a lot of people running for president. Senator Kamala Harris (CA) is running. Senator Cory Booker (NJ) is running. And I believe former Senator Bernie Sanders (I-VA) and Vice President Joe Biden (MD) are going to get their numbers to join the race after everybody else finishes jumping into the race.

Those lots of people, however, may not move enough people their way so that they can move Trump out of the way.

That’s why Trump isn’t paying any never mind to the Democrats. Trump’s like:

But you see here folks, the CBS poll also shows that 66% of all Americans agree with the Democrats that means costing the country billions of dollars, $11 billion to be exact, isn’t worth building a wall that Mexico ain’t never ever gonna pay for.

That’s why Republican senators from moderate Susan Collins (ME) to Senate Majority Leader Mitch McConnell (KY) are like, “unh-unh,” to another government shutdown.

They know the votes that count are those 66% of all Americans that include Independents because those are the folks who determine who gets to keep their cushy jobs in D.C.

And I don’t have to know Mitch McConnell personally in order to know that he loves looking at that D.C. money popping up in his bank account every month.

As we all know, history repeats itself and Trump is on the same collision course as those before him.

The fact that Trump’s already lost the House is evidence that the country is moving in the opposite direction of Trump and the Republican Party.

This means the Republicans will lose control of the Senate in 2020, leading to Trump having to deal with a Democratic Congress in the end.