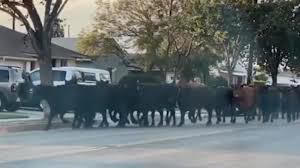 “Praise be to He!” Two Pico Rivera neighborhood cows have found sanctuary on a farm.

A famous songwriter named Diane Warren and an animal rights group named Animal Alliance Network worked together in order to help the two cows get their freedom.

Several Tuesday nights ago there were over 30 cows that made a break towards greener pastures away from the slaughterhouse where they were residing.

The Los Angeles County Sheriff Department was called in to do what the police academy didn’t train them to do which is to herd cows. Herding cows is the job of a cowboy, not a police officer.

Yet, for some reason or another, somebody over there at the 911 Dispatch Station thought it was a good idea to call the police to do the cowboys’ job.

When in fact, all the 911 dispatcher had to do was Google California Cowboys which would have given the dispatcher the names, addresses, and phone numbers of the closes cowboys in the area who, I’m certain, would have been more than happy to assist with the herding of the cows back to the slaughterhouse.

But no, the 911 dispatcher didn’t do that. He or she decided, instead, to call in the LA County Sheriff Deputies who became so overwhelmed, with the herding of the cows, to the point that one of the cows got so mad at one of the sheriff deputies and beat him or her up.

The sheriff deputy did not like that butt whuppin’, though. Therefore, he or she turned around and used his or her police academy training to shoot the poor cow down like a dog in the street.

The LA County Sherriff Department says the shooting was justified, not because the cow beat up the sheriff, but due to the cow trying to run over somebody’s baby.

The cows dispute that claim. They say their dead cow mate is a perfect example of the police’s fear of taking an ass whuppin.

“If that police man had just taken that ass whuppin’, Buddy Boy
would still be alive, today!” is what one cow said.

The cows did make it into a neighborhood where a good portion, 20, of them got stuck on somebody’s driveway that is located in a cul-de-sac.

Due to the cows’ inability to get off the driveways, they ended up getting into the back of a trailer and then hauled off to the slaughterhouse to be prepared as hamburgers and rib tips.