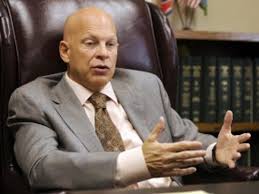 
Prosecutor Barry Staubus cites the
Bobby Godsey case as the reason
why he is not seeking the death
penalty in Megan Boswell's case
by Nathan'ette Burdine: February 16, 2021
Tweet
Follow @nbnylemagazine

Megan Boswell needs to thank her lucky stars that Sullivan County District Attorney General Barry Staubus has decided not to ask the jury to sentence her to death for her allege killing of her 15-month-old toddler daughter Evelyn Boswell.

Barry Staubus told the News Channel 11 folks that Tennessee Supreme Court will more than likely overturn the sentence of death if Megan Boswell is found guilty of murdering her 15-month-old toddler daughter Evelyn Boswell. “Because of, as I said, the prior decision by the Tennessee Supreme Court that says if you have an 18-year-old defendant without a record, and only one aggravating factor, then it’s disproportionate and it’s not a valid death penalty in that case that’s what they decided,” is what the News Channel 11 folks say Barry Staubus told them.

The case Barry Staubus is referring to is the 2001 Bobby Godsey case where he, Barry Staubus, was the assistant district attorney general arguing before Tennessee State Supreme Court that then 22-year-old Bobby Godsey’s heinous act of beating a toddler to death was enough for the state to send him, Bobby Godsey, on to eternal judgement where the punishment will certainly be more just and severe.

With all of their wisdom, the supreme judges decided that since other folks who had killed children under the age of 12 didn’t die by lethal injection, then Bobby Godsey should be treated like those other folks who were allowed to do what they denied their young victims the right to do which is to continue to breath God’s good fresh air.

Megan Boswell’s lawyer, Brad Sproles, told News Channel 11 that although his client is happy that the state won’t be killing her for her allege crime of killing of her child, Megan Boswell is not too thrill about the fact that she could be “spending the rest of her life” in a prison cell.

Megan Boswell is chopped liver. She’s already got caught lying like a cross tire about her 15-month-old daughter’s whereabouts while allegedly knowing that her daughter was dead and buried in Megan Boswell’s daddy’s backyard.

Megan Boswell is currently sitting in a Sullivan County Jail on a $1 million bond waiting for her next court date, which is May 14, 2021, in order to hear which and what way everybody will be going from there.