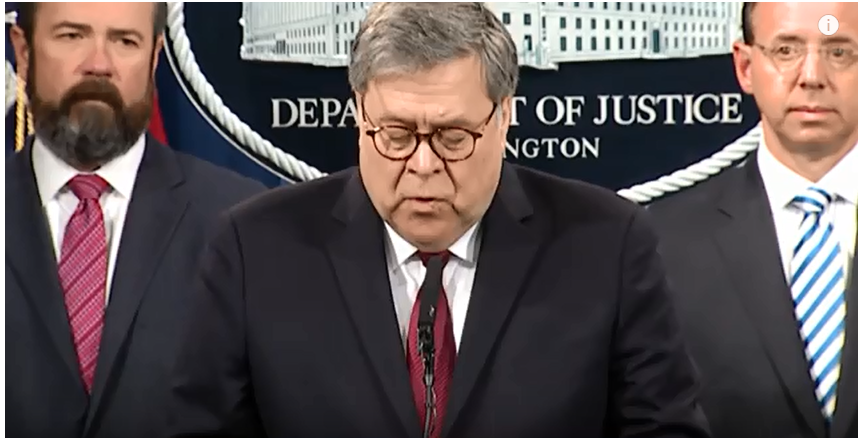 “This is the end of my presidency. I’m fucked,” is what Mueller wrote in his report about Trump’s response to Mueller’s appointment as the special counsel over the Russian Investigation.

Anybody who knows anything about anything knows “end” and “fucked” are two words used whenever a person is in deep, hot shit that he can’t get himself out of.

Trump, of course, will deny he did anything wrong. He’ll go around telling folks that he is as pure in heart, mind, body, and soul as a newborn baby.

Barr can do all the redacting and legal jargon gymnastics he wants and it still won’t cover-up the fact the truth is the funk exposing Trump for the criminal he is.

It’s there to stay. The “there” where “it” is to stay is on Trump’s Twitter feed as well as in Mueller’s Report.

Y’all don’t have to look too far. Look at Trump’s tweets from this week. Donald Trump acted like R. Kelly with Gayle King. Just read the tweets. Read them!

A must read, Andy McCarthy’s column today, “Dirty dealings of dirt devils who concocted Trump-Russia probe.” The greatest Scam in political history. If the Mainstream Media were honest, which they are not, this story would be bigger and more important than Watergate. Someday!

No Collusion - No Obstruction!

Wow! FBI made 11 payments to Fake Dossier’s discredited author, Trump hater Christopher Steele. @OANN @JudicialWatch The Witch Hunt has been a total fraud on your President and the American people! It was brought to you by Dirty Cops, Crooked Hillary and the DNC.

The Greatest Political Hoax of all time! Crimes were committed by Crooked, Dirty Cops and DNC/The Democrats.

Y’all see it! Donald Trump is off the chain because he’s been caught doing wrong. He knows it. Robert Mueller and his team know it: “Not concluding Trump committed crime, but not exonerating him.”

Here, Mueller is telling folks that he can’t do anything about the something that Trump did because the Department of Justice’s policy, which Robert Mueller and his team had to follow, is that the presidency provides immunity from prosecution to the man occupying the Office of the President of the United States.

As for us normals out here in the United States of America, we would have been thrown up under the jailhouse if we even thought about talking to a Russian or concocting some way to get rid of Robert Mueller.

The rules and laws of the game are completely different for us. Because we are, after all, just the People and not the president of the United States of America.