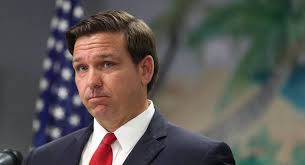 It’s time for the U.S. Department of Justice (DOJ) to open up an investigation into whether Florida Governor Ron DeSantis has a pay-to-vaccinate scheme going on that places the top 1% in the silver sneakers community in front of the COVID-19 vaccine line.

According to the folks over at the Miami Herald, Ron DeSantis hauled in $2.7 million in political contributions from the top 1% in the silver sneaker crowd who wrote $5,000 checks or greater to his political campaign.

The way the story goes is that Ron DeSantis had his team to make a list of individuals who donated generously to his campaign so that he and his team could get with local hospitals to place pop-up COVID-19 vaccines in the wealthy donors’ communities.

Some of the folks who’ve managed to get on the COVID-19 VIP vaccine list include folks living in wealthy communities that were developed by either Pat Neal or Rex Jensen as well as folks living in the ultra-exclusive gated community of Ocean Reef in Key Largo, Florida.

Due to his also generous offering, folks living in Pat Neal’s communities in Bradenton, Charlotte, and Sarasota counties were given a first-class ticket to the front of the COVID-19 vaccine line.

After realizing that there is a pay-to-vaccinate scheme going on, Rex Jensen, however, decided he better leave well enough alone. He told the powers that be to not place his name on the COVID-19 VIP vaccine list and to just leave him and his out of that mess: “Amazing. They want me to maintain a list. They can’t. Screw this.”

Rex Jensen texted that to Manatee County Commissioner Vanesa Baugh who is over the moon about the financial and political opportunities the COVID-19 vaccine pay-to-vaccinate scheme is bringing in for Governor Ron DeSantis and his loyal soldiers. “…’22 is right around the corner.” Vanessa Baugh is right, “…’22 is right around the corner.” And Governor Ron DeSantis’ $2.7 million haul is making it easier for him to round that corner.

Ron DeSantis, of course, is saying that he is a good ol’ boy who would never do such a thing. “There’s some people who are more upset at me for vaccinating seniors than they are at other governors whose policies have killed seniors, and that is a joke,” is what the governor of Florida said.

Ron DeSantis, though, is no different than his democratic counterpart, New York Governor Andrew Cuomo, who is also accused of using the COVID-19 pandemic in order to implement the “you scratch my back and I’ll scratch yours” policy that help him to remain in power.

Just like Andrew Cuomo didn’t report all the data on the COVID-19 related nursing home deaths because it would have made it difficult for him to launch his third re-election campaign for governor, Ron DeSantis gave the COVID-19 vaccine gold star treatment to the top 1% of the silver sneaker crowd because they helped him to haul in $2.7 million for his re-election campaign for governor.

It’s simple, “You scratch my back, I’ll scratch yours.” Not hard to understand. That is, unless you’re broke. Broke folks, like the working poor and middles class folks, don’t have $5,000 to give out, all willy-nilly, to the governor for a shot in the arm when they got bills to catch up and food to put on the table. To broke folks, giving out $5,000 to get to the front of the line for a shot in the arm sounds like something a meth addict or crackhead will do. It just has the funk of wrong all over it.

Rich and wealthy folks, however, see the pay-to-vaccinate scheme differently. To them, it’s simple. You pay money, go to the front of the line, and you get a shot in the arm. Simple!

The simplicity of the pay-to-vaccinate scheme is why at least 17 of the ol’ folks living in the ultra-exclusive wealthy communities of Ocean Reef took out money from one of their many bank accounts to give a $5,000 political contribution with one, former Illinois Governor Bruce Rauner ( R ), giving 50 times ($250,000) as much for the “good” of Florida. And the “good” of Florida is whatever Florida’s good ol’ boy Governor Ron DeSantis says is good for him.

And what is good for Florida’s good ol’ boy Governor Ron DeSantis is what is good for his democratic counterpart, New York Governor Andrew Cuomo, which is to look like a COVID-19 fighting machine governor who is more than deserving of another term.