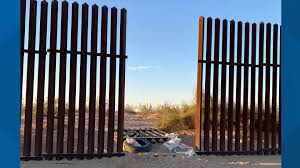 
Two SUVs drove through a hole in
the border wall near the crash site
where thirteen people were killed
on Tuesday
by Nathan'ette Burdine: March 5, 2021
Tweet
Follow @nbnylemagazine

Early Tuesday morning, two SUVs , a Ford Expedition and a Chevrolet Suburban, drove through a hole in the border wall that is located in Calexico, California, on the U.S.-Mexico border.

The sector chief for the U.S. Border Patrol in El Centro, California, Gregory Bovino, told the Associated Press folks that smugglers cut the hole in the border wall that both SUVs drove through on early Tuesday morning.

Both SUVs were carrying several people with the Chevrolet Suburban carrying 19 people and the Ford Expedition carrying 25 people. Long story short, the situation didn’t turn out good for anybody.

The Chevrolet Suburban ended up catching fire “on a nearby interstate” in California which led to the U.S. Border Patrol agents picking up everybody and taking them back into custody.

The Ford Expedition ended up in a deadly crash with a semi-truck which left 13 people in the SUV dead. Ten of those people are from Mexico.