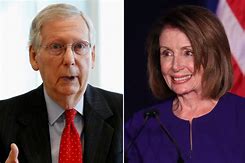 Morning Consult and POLITICO released a poll which showed voters trusting the Democrats to handle healthcare and both parties to handle the economy.

Anyone who has been following politics knows the debacle over Obamacare and the Republicans just not knowing what to do is why more voters trust the Democrats to solve the healthcare problem.

Now, this isn’t to say all Republicans have bad ideas when it comes to fixing the health care system.

It’s just that when they all get together, the many bad ideas push the few good ideas way down to the bottom of the pile.

Not too many John McCain’s left in the Republicans Party. And that’s unfortunate for the Republicans because health care has become a deciding factor in who voters choose to be their next congressman, or congresswoman, and president.

The Democrats were like, “We have a plan that’s not “trash it” man. And the voters were like, “Ok, we’ll go with them,” which they did.

I must say that the Republicans have picked up on the message that they’re not the party to fix healthcare. Because after Donald Trump started that drumbeat about “trash it,” Mitch McConnell and them communicated with him the old fashion way, face to face.

Mitch McConnell and them were like, “You’re going to make all of us, including you, lose our jobs if you keep talking bad about Obamacare. The American people like that now.  And I don’t know about you, but I like my job here in the Senate. Don’t you guys and gals like y’all’s job in Congress?”

“Mm-hmmm, yeah, we like our jobs,” is what they more than likely
said.

“Donald, you better leave Obamacare alone or you’ll find yourself
back in that retirement home down in Florida,” is the straight talk
Mitch McConnell more than likely gave Donald Trump about trying
to “trash” talk the now popular Obamacare.

The Republicans tendency to not fix things is also showing up in the polls on the question about immigration, jobs, and the economy.

Let’s start with immigration. Like health care, immigration was something the Republicans were suppose to do something about.

There was Marco Rubio and the Gang of 8. Then Donald Trump came along and said he was going to build a wall.

Welp, Marco Rubio and the Gang of 8 did nothing. And a wall is already there along the border.

Plus, nobody has figured out how to stop folks from going under the wall and over the wall.

Voters use to always turn to the Republicans whenever they wanted to get money in their pockets.

But now, the voters have made that gap between the Democrats and the Republicans tighter than five knots in a rope on the question about who voters trust to get them a job and to grow the economy.

And when it comes to the latter, it's a statistical tie because the margin of error is 3.5 percentage points.

George W. Bush's mismanagement of the economy led us into one of the worse recessions ever; which, by the way, we are just getting out of thanks to another Democratic president's, Barack Obama, actions to get our economy back on track during his eight year tenure as the president of the United States.

Yeah, but, Donald Trump has benefited from the Barack Obama’s efforts which are showing in the below 4% unemployment rate and the economy’s 3% growth.

Now, I don’t want y’all thinking that I’m just ripping on the poor Republicans because I’m not.

But with all of this shooting and killing, like what went on over the weekend at the Chabad of Poway Synagogue which left Lori Gilbert Kay dead, Rabbi Yisroel Goldstein and 34-year old Almog Peretz and his 9-year-old niece Noya Dahan injured, I have a feeling that just like on the questions about jobs and the economy the voters will close the gap between Republicans and Democrats on the question about who the voters trust to handle national security.