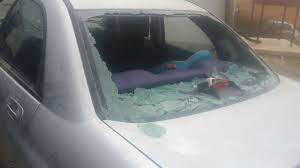 
A Jewish mother of six was saved by
a Palestinian doctor and two others
from a group of men who were
stoning her car
by Nathan'ette Burdine: September 22, 2021
Tweet
Follow @nbnylemagazine

The life of a 36-year-old Jewish mother of six was saved after a Palestinian doctor and two other people stopped a group of hooligans from throwing stones at her car.

The woman’s windows were knocked out and she had a big gash in her head. Here’s what the Jerusalem Post says she told Ynet, “I was driving and suddenly I found myself in the opposite lane with strong pains and blood flowing from my head. I went back into my lane, and it’s a miracle there wasn’t another car.”

She’s right. It’s a good thing there wasn’t another car or an on flow of traffic coming because if there had been, then she would not have been able to pull to the side of the road to check and see if there were more cuts, bruises, or gashes on her body; which, by the way, there were.

The 36-year-old mother said that after she pulled her car to the side of the road she looked down and noticed that her foot had also been struck by a heavy rock.

She tried calling the police, but 9-11 prove to be a joke in town. Luckily for her, though, a Palestinian doctor and two others arrived on the scene.

The doctor stopped the bleeding and one of the other men called the Magen David Adom (MDA). The MDA is a group that has several volunteers trained in assisting with severe medical cases.

They arrived on the scene, helped the young mother out, and then got her to the nearest hospital. “It’s a miracle that I was saved. I almost died and I cannot believe it,” is what the Jerusalem Post quoted the 36-year-old mother of six as saying to Ynet.

And thanks to a Palestinian doctor and two others, the 36-year-old mother gets to be with her six children a little while longer.