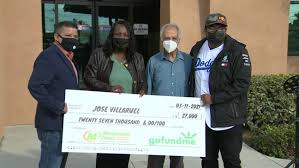 
A homeless man received $27,000
from a former student who raised
the money via a gofundme campaign
by Nathan'ette Burdine: March 13, 2021
Tweet
Follow @nbnylemagazine

No one ever forgets a good person. And in the case of Jose (Mr. V) Villarruel, his former student, Steven Nava, didn’t forget him. “Mr. V was a great funny and helpful educator and substitute teacher in the Fontana Unified School District. He’s struggled with getting back on his feet after the pandemic hit and has been living in his car ever since despite the brutal weather and living conditions,” is what Steven Nava wrote on his gofundme page for his former teacher.

Steven Nava tweeted that every morning when he left for school and every night when he returned home he saw an elderly man living out of his car.

TWITTER FRIENDS PLEASE HELP! every morning/ night I’ve always noticed this older man that would stay out in his car constantly at this parking lot near my house even when the weather was bad. He looked familiar and I’m sure alot of y’all have had him as a substitute in Fontana... pic.twitter.com/3hFpIAOMCO

Due to Mr. V just being an all-around decent human being, Steven Nava began thinking of a way to help Mr. V get back on his feet again.

There were several options like ask mom and dad for some cash, go to the bank for a loan, or start a fundraising campaign on gofundme. The quickest and easiest one, of course, is the later which Steven Nava did on March 6, 2021.

As y’all can see from the picture, Jose (Mr. V) Villarruel is a happy fella who, with the help his former student Steven Nava, is able to get back on his feet again. 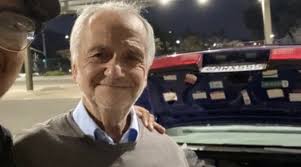 Hopefully, one of the California school districts will extend out a helping hand and hire Mr. V on full time to teach.