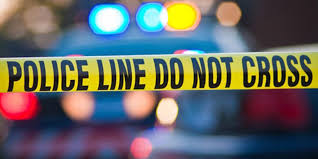 Police line do not cross tape


A juvenile shot a home intruder who
broke into an elderly woman's home
by Nathan'ette Burdine: February 16, 2021
Tweet
Follow @nbnylemagazine

Steel will bring about peace and that is exactly what a 12-year-old did after shooting and killing an armed robber who shot Linda Ellis, a 73-year-old woman, at an apartment located in Goldsboro, North Carolina. Linda Ellis was taken to the local hospital and is expected to survive.

The dead robber is a 19-year-old who was known in this life as Khalil Herring. And now he’s known in the next life as the young fool whose way of making a living has officially made him a part of the non-living.

Due to the fact that the little fella or gal was using steel to bring about peace, the Goldsboro Police Department will not be asking the district attorney to charge the young fella or gal in the case. “A 12-year-old juvenile occupant of the residence shot at the suspects with a firearm in self-defense, causing them to flee the area,” is what the WRAL folks quoted officials as saying in their written statement.

Thankfully, the 12-year-old had the presence of mind to grab a gun and put an end to what could have been a tragic situation for him or her and Ms. Linda Ellis.