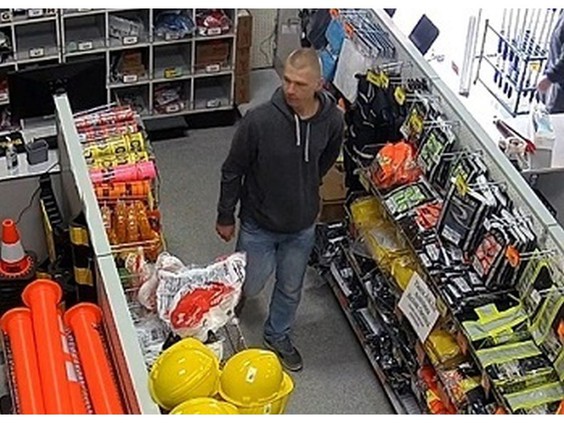 
A man attacked a hardware store
employee who asked why he
was not wearing a mask
by Nathan'ette Burdine: May 23, 2021
Tweet
Follow @nbnylemagazine

Thirty minutes after 12 on May 8, 2021, some dude, who we’ll just call Lil Skipper due to the police not knowing who he is, decided that the best way to make himself an addition to the criminal population was by going upside the head of a hardware store employee who inquired about him being mask less.

Folks, you read that right. A human allegedly hit another human all because the one human ask him a question that he didn’t like. The human who didn’t like the question had two options which included answering the question with words or just leaving the store. Instead of doing either or, Lil Skipper decided to act like a wild boar.

Lil Skipper allegedly threaten to stab to death another hardware store employee who was trying to help out the one whose head Lil Skipper went upside. Lil Skipper can be seen on camera grabbing a box cutter which he uses to knock out the store’s glass window and to throw at another person who came into his path.

Lil Skipper ain’t paying no never mind to the fact that a pandemic has hit us a human beings like a sonic boom and that mask are one of the ways in which we, human beings, protect ourselves in the public from the respiratory virus hijacker called COVID-19.

Lil’ Skipper, there, more than likely thinks that COVID-19 is something that pops up in your dreams. And as y’all can see from the photo of Lil Skipper standing there in the hardware gear aisle, he ain’t dreaming.

Lil Skipper is awake. Therefore, Lil Skipper doesn’t need to wear a mask or practice social distancing in order to protect himself from a “Freddy Krueger” virus that shows up when he is sleeping.

Welp, as a result of Lil Skipper’s animalistic behavior, Burnaby’s finest have plastered his face all of the TV screens and social media pages.

Having said all of that, I gotta admit that I kind of feel sorry for Lil Skipper, there. Lil Skipper looks like a young person who is struggling to make ends meet. The respiratory virus hijacker has taken a toll on the lot of us; especially on folks like Lil Skipper.

The best thing to do is to get Lil Skipper the financial, social, and psychological help that he needs so that he may become a more productive member of society. Because at the rate that Lil Skipper is going, somebody is going to end up putting Lil Skipper out of society.

Help Lil Skipper become a more productive member of society by calling Burnaby RCMP at 604-646-9999 so they may go and pick Lil Skipper up and then take him somewhere to get him the help he so desperately needs.