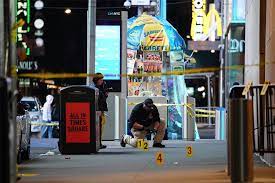 A little before five o’clock this afternoon, one man’s decision to use bullets in order to settle an argument that he was having with several other men ended with three females becoming innocent bystanders.

The three females who were shot were a 43-year-old New Jersey woman, a 23-year-old Rhode Island woman, and a 4-year-old Brooklyn girl who is being operated on at Bellevue Hospital.

Due to the fact that none of the bullets hit any vital organs like the heart, lungs, liver, kidney, or stomach, all of the female folks will live.

The bad news is that the police haven’t caught the male suspect who decided to shoot ‘em up, bang bang everything and body. The police have posted a picture of that devil, which y’all can take a gander at down below. Go on!  Look at him!  There he is!

The police are asking that anybody who knows this prison bound human to call NYPD Crime Stoppers’ phone number, which is 1-800-577-8477 (TIPS), so that the police may pick him up and transport him to his new home up state.

And y’all who live during the 80s remember how rough it was back then. It was so rough, back then in the 80s, that folks had a routine for waking up alive in the morning. They were like, “One knock means it’s safe to get up. Two knocks means roll to the other side of the bed, and three knocks means go under the bed.”

And that’s how it is now. If you don’t believe me, then just look at the fact that folks were shooting up the NYC so much, last month, to the point that they shot the shooting rates up to 166.1%.

Mm-hmm, NYC got a problem that they better hurry up and fix before they find themselves “Back to the Future” in the 1980s again.