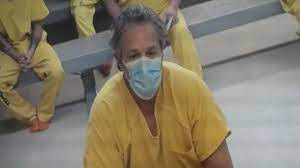 
A neighbor’s story and Andrew
Sorensen’s dead body in the
trunk of the car led to John
B. Eisenman’s arrest
by Nathan'ette Burdine: November 4, 2021
Tweet
Follow @nbnylemagazine

After a year of being on ice, the case against 60-year-old John B. Eisenman broke after the Spokane police connected information they received from one of Eisenman’s neighbors, via a tip to Crime Check, with a dead body that a group of individuals had found in the trunk of a car that they were going through.

The way the story goes is that some individuals were going through John B. Eisenman’s fiancé’s, Brenda Kross, 1991 green Honda Accord, looking for items to take, but a foul odor permeating their noses stopped them dead in their tracks.

They followed the onerous odor to the trunk of the car. Someone in the group popped open the trunk and there staring them in their eyes was none other than ol’ man Death.

Death had taken over the body of 20-year-old Andrew Sorensen who, according to the police report, was introduced to ol’ man Death by 60-year-old John B. Eisenman. Eisenman introduced the two after he, Eisenman, went cinder block upside Sorensen’s head and stab, stab, stab into Sorensen’s body.

The word is out that 60-year-old John B. Eisenman went all mad man on 20-year-old Andrew Sorensen due to his, Eisenman’s, belief that Sorensen had forced Eisenman’s teenage daughter, who Sorensen was boyfriends-girlfriends with, into a sex-trafficking ring.

John B. Eisenman and the teenage girl’s mother, Brenda Kross, drove to Seattle, where the sex-trafficking ring was, and brought the teenage girl back home. Madder than a raging bull, Eisenman turned his sights on Sorensen and begin beating him until his cinder block and knife got tired.

Seeing that the cinder block and the knife had beaten Sorensen into ol’ man Death’s hands, Eisenman went ahead and wrapped Sorensen up like a Christmas present for the ol’ man. Eisenman tied Sorensen’s hands, his feet, and taped his mouth and then tightly packed him into Brend Kross’ 1991 green Honda Accord.

The neighbor, who called Crime Check, told the police about how Eisenman confided in him or her about his killing of Sorensen. Due to the information that the neighbor provided being right all the way down to the ‘T,’ along with 20-year-old Andrew Sorensen’s rotten corpse in the trunk, the police went ahead and arrested 60-year-old John B. Eisenman and charged him with first degree murder.

For his part, Ol’ Man Death was like, “I just needed the soul, not the body, and you are will have to pay a heavy toll for delivering this soul to me.” Yeah, the gods don’t like for humans to kill low down dirty no good for nothing humans who allegedly sell teenage girls into a sex trafficking ring to be use by other humans for their pleasure. The gods prefer that humans let the human’s law and then the gods’ laws handle that sorry excuse for a human.

Yeah, it sucks all around for 60-year-old John B. Eisenman who sits in a jail on a $1 million bond.