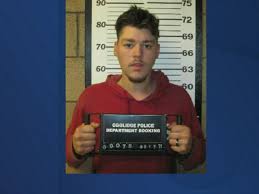 
A young Arizona man kidnapped
himself because he did not want
to go to work
by Nathan'ette Burdine: March 1, 2021
Tweet
Follow @nbnylemagazine

A 19-year-old teenager named Brandon Soules from Arizona decided that work is just something he does not want to do. Therefore, he took the extreme measure of kidnapping himself in order to get out of work.

Last month, Brandon Soules beat himself up and then took himself out to the desert where a person passing by saw him beat up and helpless in the Arizona desert.

The police came to the scene, got him out of the desert, and then took him back to the station for questioning. Brandon Soules told the Coolidge Police officers that he was standing there in front of his house when the kidnappers came along and knocked him upside his head and threw him in a car.

What 19-year-old Brand Soules didn’t know, however, is that the police had looked at the security tape from his house. And his mama and daddy’s security camera didn’t show him getting knocked upside the head and thrown into the kidnapper’s car. “…we were able to see no such thing,” is what Coolidge Police Department Commander Mark Tercero told the nbc 12 news folks.

After being confronted with the truth, the 19-year-old fella , who was charged with filing a false report, broke down and spilled all the beans on himself. “He informed us that he at first stuffed a bandanna in his mouth. Afterwards, he took off his own belt and bound his hands with his own belt. (He) laid on the ground and scooted out on the side of the road so somebody could see him and waited,” is what an official with the Coolidge Police Department told the abc 11 news folks.

Hopefully, he can get the help he needs so that he can successfully transition over to being an adult.

Or, he can take four years off from adulthood by going to college like the other young folks do.