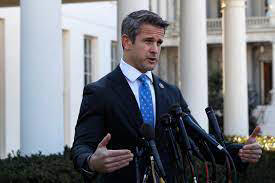 
Adam Kinzinger does not believe
the Biden Administration knows
how many Americans are left
behind in Afghanistan
bby Nathan'ette Burdine: October 29, 2021
Tweet
Follow @nbnylemagazine

Last month, back in September, on a Thursday morning during a Skype interview with CNN’s Jim Sciutto, Congressman Adam Kinzinger (R-IL) said that he doesn’t think the Biden Administration knows how many Americans are left behind in Afghanistan.

No doubt, ol’ Joe, there, will deny all of that by saying something along the lines of:

It’s just that he did leave Americans behind enemy lines in the Taliban’s Afghanistan. Evidence of that fact are the up and down numbers that ol’ Joe and his crew continue giving to the American people. The number was around 100 in September , but now the number has moved up to something closer to 200. At least, that is what CNN, The Hill, and other news outlets reported on October 23, 2021.

And if ol’ Joe and his crew can’t do simple things like counting the number of Americans remaining behind enemy lines in the Taliban’s Afghanistan, then they won’t be able to do difficult things like protecting the nation from another 9/11 attack which, by the way, the Taliban in Afghanistan helped al Qaeda to pull off by providing them with the safe haven to plan and launch their attack.