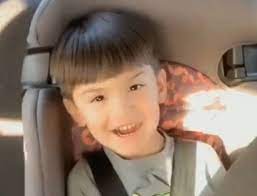 
Aiden Leos is the 6-year-old boy
who was killed during a road rage
shooting on the 55 Freeway in
Orange County, California
by Nathan'ette Burdine: May 23, 2021
Tweet
Follow @nbnylemagazine

Two days ago, on Friday morning, between the hours of 7:55AM and 8:15AM, a six-year-old boy named Aiden Leos was killed during a road rage shooting on the 55 Freeway in Orange County, California.

The California Highway Patrol (CHP) told the folks over at abc 7 that the shooter was in a white Volkswagen wagon sedan. There were two “humans” in the shooter’s car, a female human driver and a male human passenger.

Little Aiden had just turned six years old. And like many six-year olds, I’m quite sure Little Aiden went around telling everybody that he could that he was a big boy because he was going to school; a kindergartener, to be exact, over at Calvary Chapel Yorba Linda.

During the press conference, his uncle John Cloonan said that his sister, Little Aiden’s and Little Alexis’ mother, is a single parent who was working and raising her two children on her own. “My sister has been through a lot. She’s a single mom. And you took her son away. You took her boy away. This boy was full of love and joy and laughter,” the abc 7 news folks quoted John Cloonan as saying.

Yup, whoever thought it was a good idea to kill a six-year-old baby is going to think that what we humans do to him or her is a cake walk compared to what Mr. Morningstar has prepared for him or her down in hell, below.

If anyone has any information about the identity of these hellhound human beings, please feel free to contact the California Highway Patrol , over in Santa Ana, at 714-567-6000 so they can take them to our human zoo called the jail.

A gofundme page has been set up for Little Aiden’s mother and it has raised over $140,000.