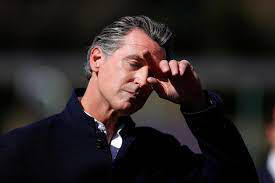 
Almost sixty percent of Californians
say they will vote for a new governor
during the gubernatorial election
next year
bby Nathan'ette Burdine: July 28, 2021
Tweet
Follow @nbnylemagazine

Californians think it’s time for their governor, Gavin Newsom, to hang up his towel and call it a day.

From July 19-20, 2021, Inside California Politics and Emerson College talked to 1,085 Californians about whether they would trade their current governor in for a new one.

The poll, which has a margin of error of +/- 2.9%, shows that 58% of Californians wouldn’t vote to put Gavin Newsom back into the governor’s chair in 2022 for all the tea in China.

Gavin Newsom would say all of that is a bunch of bull resulting from the Republican’s attempt to do a hit job on him so they can turn California as red as the early morning sun.

Although it’s true that Republicans like him about as much as they do a tax bill, it’s also true that there has been a mass exodus from the Golden State to the Longhorn State and the Sunshine State.

Republicans, Democrats, Independents, and everybody else have all gone out looking for greener pastures due to an increase in the frequency of wildfires, the drought, and the shutdown resulting from the coronavirus pandemic which has contributed to the rise in unemployment and homelessness throughout the state.

Californians have given Governor Gavin Newsom three or more thumbs down for his “Poor” handling of the coronavirus pandemic, the homeless situation, the wildfires, and the drought.

Over a majority of Californians , 52% to be exact, agree that Gavin Newsom is doing a “Poor” job getting the homeless situation under control compared to the meager 7% who say that he’s doing just an “Excellent” job ridding the streets of homelessness.

The two positives that Gavin Newsom will undoubtedly point to are the 48% of Californians who wouldn’t recall him compared to the 43% who want to give him the boot, and the 49% who “Approve” of the job he’s doing as governor compared to the 42% who say he’s doing a not so good job.

The one thing any politician will tell you is that you’re waist deep in it if you’re batting below 50% in the recall and your job performance. Don’t believe me?! Then go and ask former Democratic Governor Gray Davis how he did during the 2003 recall election!

Just like Gray Davis couldn’t run away from the problems he was riddled with, Gavin Newsom will soon find out that his poor handling of the crises that hit the Golden State’s residents like a mighty blow from the gods is the reason why Californians won’t be jumping over any unicorns or rainbows for him.

Voters are all about me and mine. Based on the poll results, Californians don’t believe that Gavin Newsom has done enough for them and theirs lately.

Therefore, it wouldn’t be a stretch to say that Californians would give Governor Gavin Newsom the boot if the 2022 gubernatorial election were held today.