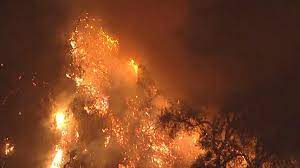 
An adult male has been arrested in
connection with the Palisades Fire
by Nathan'ette Burdine: May 18, 2021
Tweet
Follow @nbnylemagazine

Yesterday, during a press conference, the Los Angeles Fire Department (LAFD) Chief Ralph Terrazas announced that the LAFD’s arson investigators have arrested an adult male in connection with the Palisades Fire.

According to the abc 7 news folks, the Los Angeles Police Department (LAPD) have identified the male suspect as 48-year-old Ramon Santos Rodriguez. He was arrested on Sunday and is being held in jail on a $75,000 bond.

LAFD Chief Ralph Terrazas said, during the press conference on Monday, they believe they “have the right person” and that the male suspect is being treated at a local hospital for smoke inhalation. The chief also stated that area has not had a fire in 75 years and that due to the different starting points they knew it was not nature but man who started the fire. “Anytime you have multiple points of origin, your first thought is, ‘This is not natural,’” is what the chief said.

He’s right. It’s “not natural” for a fire to be starting in an area that hasn’t seen a fire in 75 years. The time span is a dead give a way in and of itself.

The one thing the chief did note is that “95% of all brush fires are human cause. Many times, it’s accidental.” In other words, it’s not necessarily a crime whenever a human starts a fire. Sometimes, according to the chief , fires are caused by down power lines, the spark from weed eaters, or people living their fire pits unattended.

The difference, in this case, is that none of those things occurred. Due to the fact that the investigation into the cause of the Palisades Fire is ongoing, the chief didn’t get into specifics about how and why Ramon Santos Rodriguez decided to go all “Fire Marshal Bill Burns.”

The Palisades Fire began on Friday night, at 10PM, in the Santa Monica Mountains. By time the early afternoon, 1PM, rolled around on Monday, the fire had spread to 1,325 acres causing the LAFD to issue “Mandatory Evacuation orders” for Los Angeles County.

The LAFD spent the entire weekend and Monday fighting the fire from the air and on the ground. The LAFD didn’t get much help from Mother Nature who, for whatever reason or another, has decided that she likes her California to be hot and dry. And the hotness and dryness is what the fire loves because the hot and dry air helps the fire to spread like butter.

The LAFD didn’t give up, though. They were like lil’ “Energizer Bunnies.” They just kept going and going. And now, all of that going and going has paid off and is showing in the LAFD’s 23% containment of the fire.

“Yeeeaaahhh” is what the folks in the Topanga area of Los Angeles County are saying because they are allowed to go back to their residences and or businesses.

The best part about all of this is that the city of Angels’ firefighting angels were able to keep everybody safe, walking upright, and all of their homes and businesses standing. One of the firefighting angels did get a little scratch, or what they call a “minor injury,” but he or she will be all right.

As for Ramon Santos Rodriguez, “Fire Marshal Bill Burns,” his hide is up the creek without a paddle. He will be hit with so many charges that mercy won’t have mercy on him.