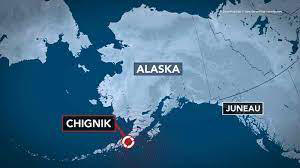 An 8.2 magnitude earthquake off the Alaskan coast


An earthquake below the surface
of the Pacific Ocean produced a
small tsunami and two earthquakes
by Nathan'ette Burdine: July 29, 2021
Tweet
Follow @nbnylemagazine

Around 8:15 last night, 29 miles down from the Pacific Ocean’s surface, the earth moved. The earth’s movement was so great that it brought along with it two earthquakes and a small tsunami wave that measured a little over half a foot.

Sirens went off warning the people of Alaska living in the southeast of Perryville, Prince William Sound, and Samalga Island to take cover. Folks managed to make it to the shelters and leave without a scratch.

Due to the tsunami not being the “Big One,” the National Tsunami Warning Center went ahead and canceled the warning.

Oh yeah, the National Tsunami Warning Center also canceled the tsunami warning in Hawaii due to that tsunami just being a little one.