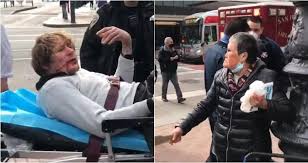 
An elderly woman beat down a
suburban thug with a stick
by Nathan'ette Burdine: March 19, 2021
Tweet
Follow @nbnylemagazine

Hahaha, take that you 30 something year old thug from the burbs! A 76-year-old woman, named Xiao Zhen Xie of San Francisco, grabbed a stick she found nearby and used it to beat the fear of God into a 30 something year old suburban thugger who ran up on her and then punched her in the eye.

Look at him! Just look at that! 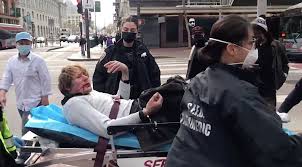 He’s on a stretcher, all bloodied up, crying and whatnot over that good butt whuppin’ Mrs. Xiao Zhen Xie gave him. But hey, he asked for it.

The CBS Local San Francisco folks told everybody that he is the one who ran up on Mrs. Xiao Zhen Xie, while she was minding her business, and then blackened her eye for no reason whatsoever. 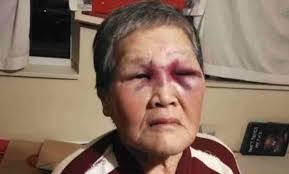 Little did he know, Mrs. Xiao Zhen Xie isn’t the one to take any disrespect from some 1980s baby who wouldn’t know what a W-2 tax form is if it popped-up on his iPhone. Therefore, Mrs. Xiao Zhen Xie got a stick and did what all of our aunts, mothers, and grandmothers would have done which is to administer corporal punishment on his hide.

As the lil’ thug from the burbs was lying there on the stretcher, bleeding, and crying, Mrs. Xiao Zhen Xie ran towards him to give him another much needed dose of act right. “You bum, why did you hit me? This bum, he hit me. He hit me, this bum,” is what Mrs. Xiao Zhen Xie told the crowd as she tried plowing through the police who refused to allow her to continue her application of the necessary amount of dosage of act right to the lil’ thug from the burb’s hide.

Unbeknownst to that little fool, though, he will now be charged with several crimes which will include assault and attacking an elderly. Yeah, he’s in a shit fire of a mess that the devil won’t get him out of.

Well, sucks for him. Dumbass!