“Got beer?!” is what the ancient Egyptians who used beer as medicine would ask.

According to the BBC, archaeologists have located what they believe is the world’s oldest beer factory. The beer factory is located at an ancient Egyptian burial site in Abydos, Egypt. 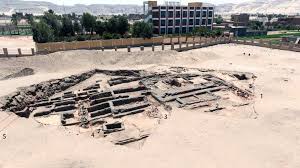 The archaeologists knew they had stumbleupon an ancient brewery site because they had found all the cooking utensils and ingredients used to make beer.

The archaeologists found what appears to be 8 different work areas with approximately 40 pots in each work area, different types of grains, and water which were all used for the production of the 5,000 gallons of beer the ancient Egyptians were producing throughout the day.

Due to the Egyptians being the pioneers in medicine, yup Imhotep came before Hippocrates, it wouldn’t be far fetch to say that the ancient Egyptians’ use of beer was for medical use more so than any other reason.

The ancient Egyptians soaked wheat grains in water, for almost a day, and then they drained the grains, placed the grains onto a towel, and then let the drains dry out.

After drying out the grains, the ancient Egyptians took the dried out grains and ground the grains into flour so that they could make bread.

The bread was baked and then taken off the fire after it developed a very hard crust. The hard crust was broken up “into a vat,” mixed in with tea, which the ancient Egyptians used the “unmilled grains” to produce, and fermented.

Voilà, beer was produced and used to treat the sick!