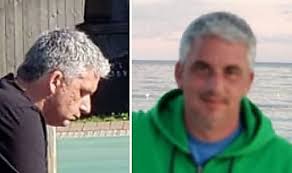 
Andrew Fraioli is the New Jersey
man who was found dead under
a snow mound
by Nathan'ette Burdine: March 13, 2021
Tweet
Follow @nbnylemagazine

Andrew Fraioli is the 40-year-old man who went missing in Wyckoff, New Jersey, on the day, January 31, 2021, when a powerful nor’easter named Orlena came roaring in and dumping over a foot of snow on the east coast.

On Monday, the Wyckoff Police Department informed the public that Andre Fraioli’s parent’s neighbor, a woman, found the 40-year-old man dead, buried under a snow mound in her front yard.

Due to the harsh wintry conditions, the police usually have to wait until the snow melts in order to find folks who’ve gone missing. Knowing that fact, the Wyckoff police didn’t exclude the possibility that Andrew Fraioli was a victim of the harsh wintry conditions and that they would have to wait until the snow melted in order to find him.

It doesn’t mean, however, that the police didn’t look for him because they did do an extensive search of the neighborhood and the surrounding neighborhoods, as well as checking his cellphone and activity on his back account.

Things were normal, but not normal. Yet, nothing was so abnormal to the point that the Wyckoff police raised the alert level. Andrew Fraioli’s car was parked outside his parents’ home, normal. His cellphone kept sending back a signal with a location in his parents’ neighborhood, normal. Money was still in his bank account, not normal. The police even borrowed Maywood Police Department’s famous bloodhound, Remi, whose nose didn’t take them anywhere outside of the vicinity of the neighborhood.

Therefore, after taken in all of those factors, the police were left with the conclusion that Andrew Fraioli may have very well been a victim of the powerful nor’easter, Orlena.

Just to be clear, although Andrew Fraioli was found buried under mounds of snow, the police haven’t closed their investigation. The Wyckoff police are still conducting their investigation and waiting on the Bergen County Medical Examiner’s report for a cause of death before they issue their final report on what they believe led to Andrew Fraioli’s passing.