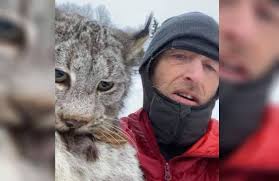 What do you do when you catch a 24 pound lynx stealing and killing your chickens that you plan on killing, cleaning, and then frying for your dinner?!

Nothing, is what you do because it is a 24 pound lynx who can also kill and eat you. However, if you’re Farmer Chris Paulson from northern British Columbia then you grab the 24 pound lynx by the back of his neck and scold him for stealing and killing your chickens that you want to kill and eat:

“Let’s go see the damage you did buddy. Yeah, you wanna go see
the damage you did. How many chickens did you get? Yeah, you
got some of our new ones. Not good, is it? Nooo. Yeah, I know
it’s not good (smiling). First the owl and then you. Huh? Yeah,
let’s go have a look at this damage. There’s one. See how upset
you made everyone. There’s two. That’s two of our new chickens.
These guys are pretty upset over there.”

“I would’ve had 12 of your ‘new chickens,’ if you hadn’t come
along. And if you didn’t sneak up on me, I would’ve had your arm
to go along with those 12 ‘new chickens’ of yours,” is what the Mr.
Lynx more than likely said to himself.

Here’s what Jeff Palm told the CBC folks, exactly, “We don’t recommend handling a lynx with bare hands. You certainly might lose an arm. Lynx are wild cats and they can be ferocious. It is technically illegal to capture live wildlife and move them to a new location and can result in a fine.”

Farmer Chris Paulson decided to place Mr. Lynx back out in the woods with the two chickens he had just killed and not to “BANG, BANG, BANG” up on Mr. Lynx because it looked like it had been a while since Mr. Lynx had a good meal to sleep on.

Now folks, the thing that y’all have to keep in mind is that although Mr. Lynx’s weight is between the normal 24 pound (11 kilograms) to 28 pounds (13 kilograms) range of his kind it doesn’t mean his stomach wasn’t growling because of a lack of food for a day or two or three.

Heck, evidence of that fact is his stealing of those chickens and I know Mr. Lynx never would’ve resorted to chicken stealing if his belly had been full from a decent meal. Basically, Mr. Lynx had to do what he had to do which was to steal himself some food so he wouldn’t die from hunger.

As a matter of fact, Farmer Chris Paulson pitied poor ol’ Mr. Lynx so that he let his children, Kickan age six and Charlie age nine, do for Mr. Lynx what they did for the two dead chickens that Mr. Lynx had killed which was to name Mr. Lynx. Lil’ Kickan and Lil’ Charlie named the two dead chickens Freda and Birdie and they named Mr. Lynx Tuffnut. Tuffnut is a fitting name for Mr. Lynx who had to survive out there in the Canadian wilderness for days without a decent meal.

I must say that Mr. Lynx Tuffnut was very lucky because he has some stiff chicken stealing competition coming from the biggest owl on the North American continent.

Y’all read that right, folks, Mr. Lynx Tuffnut has stiff chicken stealing competition coming from the great grey owl. The great grey owl stands between 2.0 feet to 2.9 feet with a wingspan of 5 feet and the ability to swerve his head 270 degrees around.

Farmer Chris Paulson’s wife’s, Rachelle van Zanten, forehead came in contact with Mr. Great Grey Owl’s talons when she tried to save two of the family’s chickens, Blackie and Denelectro.  “The owl hit me right in the headlamp and left my head tingling,” is what Rachelle van Zanten told the CBC folks.

Rachelle van Zanten is a famous singer who sings songs about farm life for the kids. Two songs she can sing are, “The great grey owl made my head ring for a while,”and “Two chicken feathered covered lynx.”

According to Famer Chris Paulson , his family has been living on what they call “unceded Wet’suwet’en territory” which the folks over at the Canada’s National Observer say is a polite way of saying they’re living on “stolen” land.

Not good. Come to think of it, that’s probably why Mr. Lynx Tuffnut and Mr. Great Grey Owl are stealing their chickens because they know they shouldn’t be there in the first place.

“What goes around comes around.”