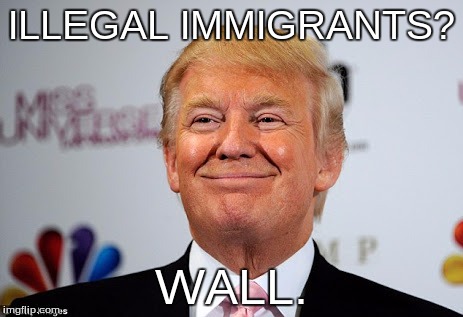 This is a meme that I don't own


#BoycottTrumpsAddress is
Americans' way of telling Donald
Trump they aren't for his way
of securing the border
by Nathan'ette Burdine: January 8, 2019
Tweet
Follow @nbnylemagazine

Americans have decided they are not tuning in to Donald Trump’s National Address about why he needs to call a National Emergency in order to take money from the military’s funds to build a border wall that will not help solve the complex problems surrounding immigration.

Folks have pointed to Donald Trump’s love for dissing anything of color as evidence that this is nothing more than red meat for his base who believes a border wall can solve all of their problems.

Trump, of course, says he loves everybody whose skin color can be found in the Crayola box and everybody loves him.

Trump be like, “I love the blacks, the browns, the yellows, the oranges, the whites, and the reds! I love the Shanikas, Latishas, Beckys, and Chrissys! I love the Leroys, Deions, Teds, and Toms! I love everyone!”

However, his “Felipe Lopez” take on George H.W. Bush’s “Willie Horton” ad along with Donald Trump’s “they aren’t sending us their best” and “shithole countries” comments have rubbed several folks the wrong way.

Plus, Americans in general aren’t liking it that media networks like CNN, MSNBC, FOX News, and all the other ones with the big bucks are profiting big time from peddling all of Donald Trump’s ol’ man ramblings.

So, Americans are doing what they do best; hashtagging. And today’s trending hashtag is none other than #BoycottTrumpsAddress.

A thought: instead of simply boycotting Trump's address, MAKE YOUR OWN! Record some thoughts and share them on social media tomorrow evening. If enough people do this the networks will cover it, and Trump HATES competition. #BoycottTrumpsAddress pic.twitter.com/pm8AqLVk3X

Public service announcement: #BoycottTrumpsAddress and choose from these TV options on Tuesday 9 p.m.

Would literally rather do anything else pic.twitter.com/mex3mhd97C

Maybe one of the corporate news stations will run an emergency, live presentation by a federal worker who can't pay their bills tomorrow night. #BoycottTrumpsAddress

#BoycottTrumpsAddress I would rather listen to Fran Dresher on helium doing Gregorian chants accompanied by a Theremin, a Didgeridoo and nails on a blackboard with Diamond and Silk as backup singers.

I’ll be too busy letting spiders crawl all over me to watch this...sorry 🤷♀️ #BoycottTrumpsAddress pic.twitter.com/HDot2S2CTs