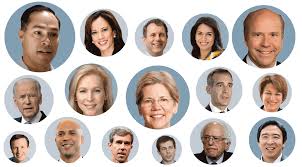 CNN ain’t doing nothing but making the Democratic presidential candidates look like a joke with this Democratic debate lottery draw they got going on at eight o’clock tonight, here.

Y’all just stop and think about that for a moment. Here, we got a major cable news network placing 20 folks on the Democratic side in a lottery draw, which CNN’s calls “THE DRAW”, in order to determine which candidates will win the primetime interview spots for the highest office in the land.

One or two of CNN’s news anchors are going to be standing up there waiting for the word to spin the little wheel that has all of the Democratic presidential candidates’ names in it.

After the wheel stops on the second go around, Don Lemon or somebody else will take out the little piece of paper to see who’ll be the lucky one to get a primetime slot on the debate stage.

CNN is doing three draws because they want to make sure everybody has an equal opportunity of getting on the debate stage with the top four candidates (former Vice President Joe Biden, Senator Bernie Sanders (I-VT), Kamala Harris (D-CA), and Elizabeth Warren (D-MA) who we all know should be the only Democratic presidential candidates on stage.

In the “spirit of inclusion,” CNN has decided to give us, the voters who are also the employers of the president of the United States (POTUS), a say by using the poll results to determine where everybody will stand on the stage.

Meanwhile, We the People, who are POTUS’ employers, are sitting at home looking at all of this with a WTF look. We’re trying to figure out why is it that all of these other folks, 16 of them to be exact, are given a chance to be a part of an interview process that We the People have already excluded them from by not placing them in the top tier of the polls.

That’s like Coco-Cola shareholders telling the board they want to see the top four candidates for CEO and then the board bringing in 16 more people because Mark Zuckerberg told them that having 16 more people will make a good show on Facebook Live.

I mean, what type of shit is that?! Just like the folks over at Coco-Cola aren’t going to pick the company’s CEO based upon how many likes that person gets on Facebook, We the People don’t need to be picking the next president of the United States based upon the number of ratings he or she can help CNN or any other cable news network to get.

Folks, this is serious business here! We’re talking about the continued existence of our nation. And picking a fool, a dummy, a thief, and or all of the above to be the next president of the United States is a sure way to expedite the vanquishing of our nation.

A fool, a dummy, and a thief will mess up all of our money and sell our country for a copper penny. They’ll get rid of regulations meant to keep things in order, which will create instability leading to folks not wanting to invest in our country. Then there’s the whole thing with security.

But that’s what happens whenever the process to determine who will be the next president of the United States is diminished by romanticizing the process, via a Lottery called “THE DRAW”, to include presidential candidates in the interview process that the We the People have already excluded them from.

No longer is it about who the voters want. Now, it’s all about who has the most Twitter followers, whose videos and pictures get the most likes on Instagram, and who’ll help the cable news networks to get the highest ratings.

And as long as We the People continue to allow cable news networks, like CNN, to treat our process to determine our next employee for president of the United States like a reality TV show, then we’ll end up, once again, with a reality TV show president who’ll take us closer to the edge of the cliff. Until one day, we’ll all go over that cliff which will then lead to the ending of this great country that we love so dearly.