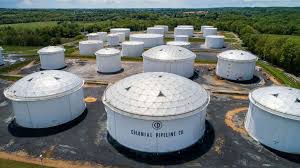 Folks throughout the Southeastern United States can stop panic buying gas now that Colonial Pipeline has reportedly paid the hacking group DarkSide $5 million in cryptocurrency in order to restart the company’s fuel system.

Just so y’all know, the USA Today folks said that the Bloomberg folks are the ones who talked to two Colonial Pipeline folks who said they forked over the $5 million in cryp-to-cur-ren-cy.

Colonial Pipeline isn’t saying anything, though. And who can blame them. They just got hit for $5 million in cryp-to-cur-ren-cy. Here they are, a major oil company with pipelines running from the Southeastern part of Texas all the way up to the Northeastern shores of New Jersey and yet their computer systems aren’t able to fight off a ransomware attack from some hackers.

Heck, it’s not like the Colonial Pipeline folks are unaware of the thoughts many folks are having about their inability to secure their systems that control the pipelines.

As evidence of their guilt about their inability to secure their computer systems that control the pipelines, one of the Colonial Pipeline folks, who talked to the Bloomberg folks, tried throwing salt on DarkSide’s hacking game by claiming that the group’s decrypting tool was sub-par at best and was therefore not of any use to them in helping to restart their systems: “Once they received the payment, the hackers provided the operator with a decrypting tool to restore its disabled computer network. The tool was so slow that the company continued using its own backups to help restore the system.”

Yeah, whatever man or woman! If Colonial Pipeline had the proper tech folks in place to help them secure their system that control their pipelines, then the company never would’ve been hacked and shutdown for six days; causing all of that panic gas buying, and whatnot, from the Southeastern part of Texas all the way up to the Northeastern shores of New Jersey.