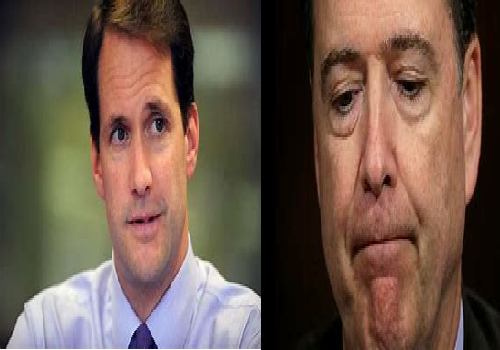 Congressman Jim Himes (D-CT) is sick and tired of Donald Trump running around here telling folks that the FBI and James Comey have sic a bunch of witches on him.

During a sit down with CNN’s Wolf Blitzer on The Situation Room, Jim Himes let folks know that Donald Trump can’t get around the fact that James Comey never told the American people about the investigation into Donald Trump’s presidential campaign ever so close relationship with the Russians.

“Step back here a second and remember what happened and what
is not in dispute. Here’s what happened. Jim Comey, at the time
the director of the FBI and now of course the enemy of the
president, Jim Comey twice before the presidential election of
November 2016 announced an investigation into one candidate,
Hillary Clinton. And did not announce an investigation that was
ongoing, into another candidate, Donald Trump. So there is an
argument to be made that the FBI, and in particular Jim Comey,
handed this election to Donald Trump,” is what Himes told Blitzer.

Jim Himes let all of that out because he’s not too happy about Donald Trump sending out codes to Attorney General William Barr to handle “this.”

Y’all remember Michael Cohen telling Elijah Cummings and them on the House Oversight Committee that Donald Trump talks in codes?

Welp, that’s what Trump did with Barr when he decided to give Barr complete control over declassifying the evidence in the Russian Investigation.

Trump is waiting to see how good Barr is at cherry picking evidence that is beneficial to him. I mean that evidence Barr cherry picks better be so ripe that it sweetens all the American people’s hearts and minds up to Donald Trump. Because if that evidence is anything but ripe, Barr will have to walk into a bar in order to find himself another client.

Ask Michael Cohen. He’ll tell you about how cherry picking for Trump got him an extended stay in one of our nation’s finest penitentiaries. Doing Trump’s bidding will get you on the bad end of the business.

Unfortunately for Barr, he placed himself in a pigeon hold when he told Congress that he can’t share everything in the Russian Investigation with the American people because of pending cases.

Therefore, after looking at all of that, a reasonable person would rightfully question why Trump would give Barr the power to declassify information that Barr told congress he couldn’t declassify. Are y’all following?! Mm-hmm, it doesn’t look good, does it? That investigation goes deep.

And it isn’t a coincidence that Donald Trump is hating on James Comey, who he praised for re-opening the investigation into Hillary Clinton, the same way he hated on his former lawyer Michael Cohen after he turned state evidence.