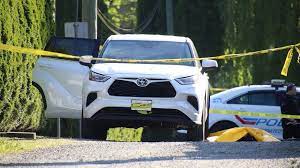 
Coquitlam shooting victim Mir Aali
Hussain was known to police but
he does not have any connections
to the ongoing Lower Mainland
gang violence
by Nathan'ette Burdine: May 26, 2021
Tweet
Follow @nbnylemagazine

The Integrated Homicide Investigation Team (IHIT) stated that although Coquitlam shooting victim Mir Aali Hussain was known to the police, they don’t believe he has any connections to the ongoing Lower Mainland gang violence that has been gripping British Columbia since the beginning of the year.

IHIT continues to work with @cqrcmp on Saturday's fatal shooting investigation. Victim is a 42yo man with no obvious ties to the LM gang conflict. News release to be issued shortly.

At the age of 42, Mir Aali Hussain was shot dead on a Saturday afternoon in an alley located in a suburban neighborhood where the residents aren’t use to the sounds of bullets whisking by.

A fella who was watching a game of hockey on his flat screen TV told the Vancouver Sun folks that he heard several bang, bang, bangs and then “The next thing we know-about half an hour later-there’s cops everywhere.” The police were all over the place due to the fact on first sight Mir Aali Hussain’s death had two key markings of a gang hit.

Yasin Khan was killed in Nanaimo while he was out and about in a plaza that was filled with people. Gurkeert Kalkat’s death occurred while he was in Calgary trying to get himself from point A to point B “in the 1800-block of 26th Avenue SW.”

The police arrested three people in connection with Yasin Khan’s murder but they decided to let them go until they are able to get more information about what exactly went on. The police haven’t identified any suspects in Mir Aali Hussain’s death or Gurkeert Kalkat’s death.

The trouble that the police are running into is that they aren’t able to definitively identify the suspects who were seen in the vehicles that were used during the murders.

In the case of Mir Aali Hussain, the suspects who drove the burgundy 2002 Buick Century used fake license plates in order to prevent the police from tracing the car back to the owner who is more than likely able to point the police towards the direction of the suspects.

Unbeknownst to the suspects, though, the police don’t need the license plate when they have the car and its VIN which will lead the police back to the dealer who sold the car to a person who can point the police in the right direction of those who know one, two, or three of the suspects involved in the killing.

It also doesn’t help the suspects that Mir Aali Hussain was a target in a failed hit almost eight months ago on October 6, 2020. Mir Aali Hussain was coming out of the Bells and Whistles pub with a woman and two children. Everybody made it out alive and the hitmen, Liban Hassan and Ahmed Ismail, are keeping a jail bed warm while awaiting trial on attempted murder. Ahmed Ismail, by the way, has a kidnapping and murder trial he’ll have to attend in Ontario due to his decision to kill a 16-year-old kid.

Now, folks, we don’t like to speculate because we know that “correlation doesn’t equal causation.” However, there is a lot of correlation in causation which means that many of these will come back and get their target who they missed. “Gang members will, for lack of a better word, stalk other gang members,” is what Combined Forces Special Enforcement Unit (CFSEU) Sgt. Brenda Winpenny told the Langley Advance Times.

Although the police aren’t definitively saying that Mir Aali Hussain was connected to one of the Lower Mainland gangs, it doesn’t take a rocket scientist to figure out that two hitmen being sent to kill you is a sign you’re in some mess.

And it also doesn’t take a rocket scientist to figure out that somebody or bodies came back to clean up the mess that the two hitmen fail to clean up.

As for the suspects in the death of Gurkeert Kalkat who think they passed the “How to Get Away with Murder” course, they made a grave mistake that so many like them make 100% of the time.

The grave mistake the suspects made was several witnesses seeing them get into a car after they had set ablaze the car that they used during the hit. “Witnesses observed multiple suspects leaving that vehicle and entering into a blue four-door car-possibly a Subaru-and fled the scene, and we believe it is a targeted attack,” is what the Vancouver Sun folks quoted Calgary Police Service Sgt. Duane Lepchuk as saying.