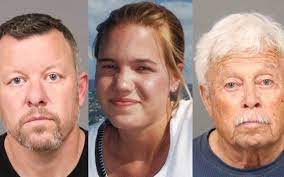 Court documents, obtained by the Associated Press folks, revealing that Kristen Smart’s body was buried under the deck of Paul Flores’ family home shows that Ruben Flores isn’t the innocent little ol’ 80 something year old man that he will like the court to believe he is.

On Monday, Ruben Flores pleaded not guilty to helping his son Paul Flores hide Kristen Smart’s dead body back in 1996.

He and his son’s lawyer, Robert Sanger, stood up in the court room before Judge Craig Van Rooyen and told him that all the state’s evidence amounted to “Waffle House” talk. And therefore both his clients should be let out on bail.

Judge Craig Van Rooyen told the younger one he had to stay in jail, without bail, because he is being investigated for a string of sexual assaults from San Luis Obispo County to Los Angeles County.

The judge took pity on the old one because he’s old and he has sugar, a bad heart, and colitis. Come to think of it, here’s what the judge said, “We should not be punishing people before the case has been proved against them. Given the way that murder trials go, I think there’s a fair possibility that if he’s kept in custody he could serve out the maximum…before even being able to test the evidence against him,” is what the Associated Press folks said Judge Craig Van Rooyen said.

Although the judge agreed to set bail for Ruben Flores, all of that may very well change now that the San Luis Obispo County Sheriff’s Department’s investigators have determined that Kristen Smart’s body was buried under Ruben Flores’ deck.

It also doesn’t help Ruben Flores that the evidence shows that Kristen Smart’s body was “recently” moved. “The excavation below his deck…showed damning evidence that a body had been buried in that location and then recently moved,” is what the Associated Press folks quoted Prosecutor Christopher Peuvrelle as saying.