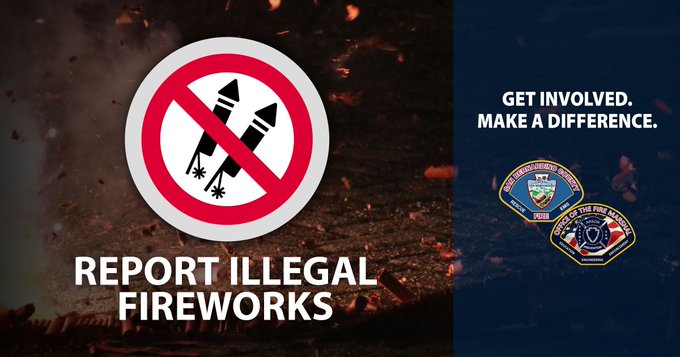 The deadly Ontario fireworks explosion that killed two people and caused over $3 million worth of property damages to homes has led to San Bernardino County Fire officials putting in place a firework reporting system that allows anonymous reporting on those who are in possession of illegal fireworks.

NEWS: Illegal Firework Reporting System - Mechanism for residents to report the use and sales of illegal fireworks. It only takes a few minutes and you can remain anonymous. Get involved. Make a difference.

Under California’s Health and Safety Code, a of person who is in possession of illegal fireworks will be charged with a misdemeanor and a possible one year jail sentence and/or a hefty fine that is determined by the weight of the fireworks.

If, like in the case of the deadly Ontario firework explosion, a person is in possession of illegal fireworks that cause either property damage, bodily injury, and or death, then the person will also face other criminal penalties under the law that will most likely include a lengthy prison sentence and a hefty six-figure fine.

The good news is if a person is caught with illegal fireworks that haven’t done any damage to humans and or property, then the person will only have to spend one year in jail.

The bad news is that California will blow a hole in the person’s pockets who’s been caught with illegal fireworks.

And as y’all can see, anything from $50,000 on up will blow a crater like hole in a person’s pockets.

Therefore, if you’re either too poor or too middle class to afford either a $50,000 fine or six-figure fine, then don’t go out there getting fireworks that write checks that your behind can’t cash.