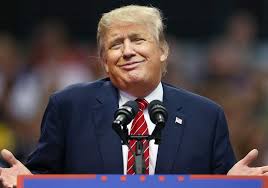 
Donald Trump says he would
have a 70% approval rating if
the media reported 'straight
news' about him
by Nathan'ette Burdine: May 26, 2019
Tweet
Follow @nbnylemagazine

Donald Trump swears up and down that he’ll have a 70% approval rating if only the folks in the media would report “straight news” about him.  And when “The Donald” says, “straight news,” he means, of course, good news.

That's what Donald Trump told the press before he left the country to go on his trip to Japan.

All Donald Trump has to do is get Russian President Vladimir Putin and his crew to do to the Democratic presidential candidates what they did to Hillary Clinton; which is to spread fake news stories on Facebook, Instagram, and Twitter about them.

Now, now, now I know Donald Trump will pull out his “No Collusion. No Obstruction” signs in an effort to convince folks that his actions are in no way a reflection of the words coming out of his mouth and the tweets tweeted on his Twitter page.