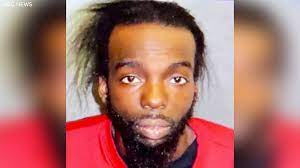 
Farrakhan Muhammad is reportedly
the name of the Times Square
gunman who shot three female
bystanders while aiming for
his brother
by Nathan'ette Burdine: May 11, 2021
Tweet
Follow @nbnylemagazine

Farrakhan Muhammad is reportedly the name of the Times Square gunman who shot three female bystanders while aiming for his brother.

Folks, y’all read it right! Not only did he allegedly try killing his brother, but he ended up shooting three females in the process of trying to kill his brother. And to top it off, the 31-year-old Farrakhan Muhammad did all of this on Mother’s Day.

I don’t know if that fella and his brother share the same mama and or the same daddy, but I do know that with the name Farrakhan Muhammad he is not helping the Muslim cause by playing “cowboys” with his brother and then shooting up the female folks, which included a four-year-old baby, in the process.

Don’t get me wrong, now, I’m not saying that all of the Muslim folks are bad. I’m just saying that he isn’t helping the Muslim folks’ cause by shooting up everybody in Times Square. Y’all know people. The first thing they’ll say is, “Look at them Muslims, trying to start a jihad in the Big Apple and everything.” That’s people. They aren’t looking at the fact that fool is just a fool who thinks he should do his criminal part by helping the shootings in NYC go up from 166.1% to 167.0%.

And 31-year-old Farrakhan Muhammad can’t do his part in increasing the shootings in NYC if he’s as sweet as a lamb and all the lil’ ol’ ladies are just adoring him. No sir! Unh-unh! He got to be the bad apple in the Big Apple if he wants to help increase the shooting rate.

Hopefully, the law will catch a hold of him and send him upstate before he can continue on with his criminal contribution.