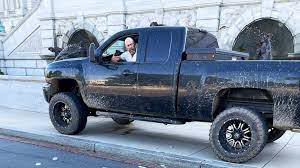 Before 49-year-old Floyd Ray Roseberry hopped in his truck and drove up from North Carolina to D.C. with the intent to blow up everybody in the Capitol and the surrounding area, the police in Cleveland County, North Carolina, were warned at least two times about his love for blowing up stuff that he shouldn’t be blowing up.

A neighbor of Floyd Ray’s , and yes that is two first names, told the police about all of the loud banging noises that were coming from Floyd Ray’s property.

The police checked it out and, for some reason or another, decided that it wasn’t that much of a concern for them to take ol’ Floyd Ray, there, down to county.

Like the good neighbor, a relative of Floyd Ray’s warned the police in North Carolina about how Floyd Ray’s hate for Democrats and anybody else who didn’t make him see rain ball gum drops drove his insatiable need to blow up stuff.

As a matter of fact, it was the day before ol’ Floyd Ray drove up to D.C. from North Carolina with his bomb making materials that his relative warn the police in North Carolina about what could have easily been another national disaster if Floyd Ray had successfully made a working bomb.