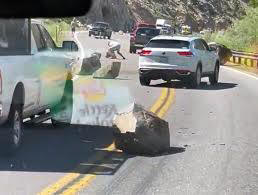 Just before 4 in the afternoon on Thursday, forty aftershocks followed behind a magnitude 6.0 earthquake that hit near the California-Nevada border.

The aftershocks caused several large rocks to fall down, blocking the roads on HWY 395 to State Route 182 near the town of Bridgeport which is along the California-Nevada border.

Nobody got hurt. The road crew cleared the boulders out of the road. So with the exception of the 100 degree plus temperatures, everything is cool, now.