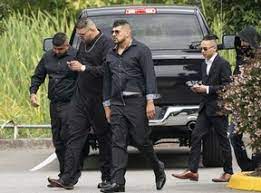 
Harb Dhaliwal’s gangster lifestyle will
make it difficult for the Vancouver
Police to ID a suspect in his killing
in Vancouver’s Coal Harbour
by Nathan'ette Burdine: April 21, 2021
Tweet
Follow @nbnylemagazine

Harb Dhaliwal’s gangster lifestyle will make it difficult for the Vancouver Police to ID a suspect in his killing in Vancouver’s Coal Harbour.

Like all gangsters, Harb Dhaliwal had a long lists of enemies who wanted him horizontal in the ground. Those enemies include such gents and gals like the Cahil gang, the Red Scorpions, the Hells Angels, the Wolfpack , the Kang and Latimer gang, and the United Nations who, mind you, aren’t members of the UN.

Math, it’s so fun because it tells you everything you need to know about gangs. For instance, take the fact that the Brothers Keepers gang has spread their little gang wings out to 21 jurisdictions in British Columbia.

Being in all those different areas, within BC’s borders, has helped the Brothers Keepers gang to network with over 920 people who’ve helped them to get access to over 30 kilograms (66 pounds) of their prime products fentanyl, meth, heroin, and cocaine.

The expansion and access to really good drugs has placed the Brothers Keepers gang in direct conflict with their competitors who don’t take too kindly to competition. These gangster gents and gals don’t use legal means in order to cut out their competition. These gangster gents and gals just cut out the competition, literally. Therefore, it’s not surprising that before he was gun down under a moonlit sky in Vancouver’s Coal Harbour, Harb Dhaliwal nearly escape two attempts on his life.

When all of that attempted killing didn’t work, the rival gang or gangs turn their attention, in 2019, towards Harb Dhaliwal’s younger brother, Meninder. Luckily for Meninder, he’s still living.

Mind you, now, the police don’t know who actually killed Harb Dhaliwal or who tried to kill him and his brother because that whole “snitches get stitches and put in ditches” thing is very much true. It’s the gangster law. Due to the fact that nobody wants to be in violation of the gangster’s law, folks tend to zip their lips.

The thing about all of that lip zipping, though, is if folks exercise their right to remain silent then they may very well find themselves lying horizontally in a “ditch” just like Harb Dhaliwal and those who’ve come before him are doing.