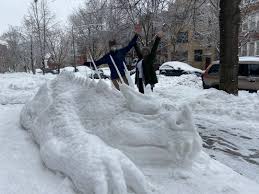 Over in Lincoln Square, Warren Window and Alexis Hoffman sculpted a snow dragon. The snow dragon is named Jasper after one of the couple’s neighbor’s young son who asked if the snow dragon had a name yet.

And that’s mainly due to the local ordinances. Because hey, you can’t have a fire blowing dragon blowing fire out of its nostrils on your front yard.

I must admit, though, that would be cool to see fire coming out of the nostrils of a snow dragon that’s just hanging out on somebody’s front yard. I can see it now all of the fire and smoke blowing everywhere.

It would be the coolest thing ever!