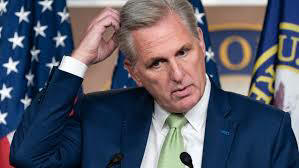 The fact that “House Rule XI, clause 2(m)(1) and (3)” gives committees and subcommittees in the House the power to subpoena companies and humans for information pertaining to an investigation that is being conducted is the reason why folks shouldn’t pay any never mind to House Minority Leader Kevin (Kevin Kevin) McCarthy’s (R-CA) carrying on about the U.S. House Select Committee to Investigate the January 6TH Attack on the United States Capitol having subpoena powers that he’s convinced himself that the committee doesn’t have.

“If these companies comply with the Democrat order to turn over private information, they are in violation of federal law and subject to losing their ability to operate in the United States. If companies still choose to violate federal law, a Republican majority will not forget and will stand with Americans to hold them fully accountable under the law” is what the Politico folks quoted Kevin Kevin’s statement as saying.

Kevin Kevin is mad because he knows the telecommunication and social media companies will comply with the U.S. House Select Committee to Investigate the January 6TH Attack’s subpoenas for his texts and tweets from Insurrection Day, January 6, 2021.

Folks, y’all read that right! Kevin Kevin ain’t paying any never mind to any Republicans or anybody else’s texts and tweets the Select Committee is going to read. He’s thinking about himself.

The perception of being a friend will help you keep your congressional seat.