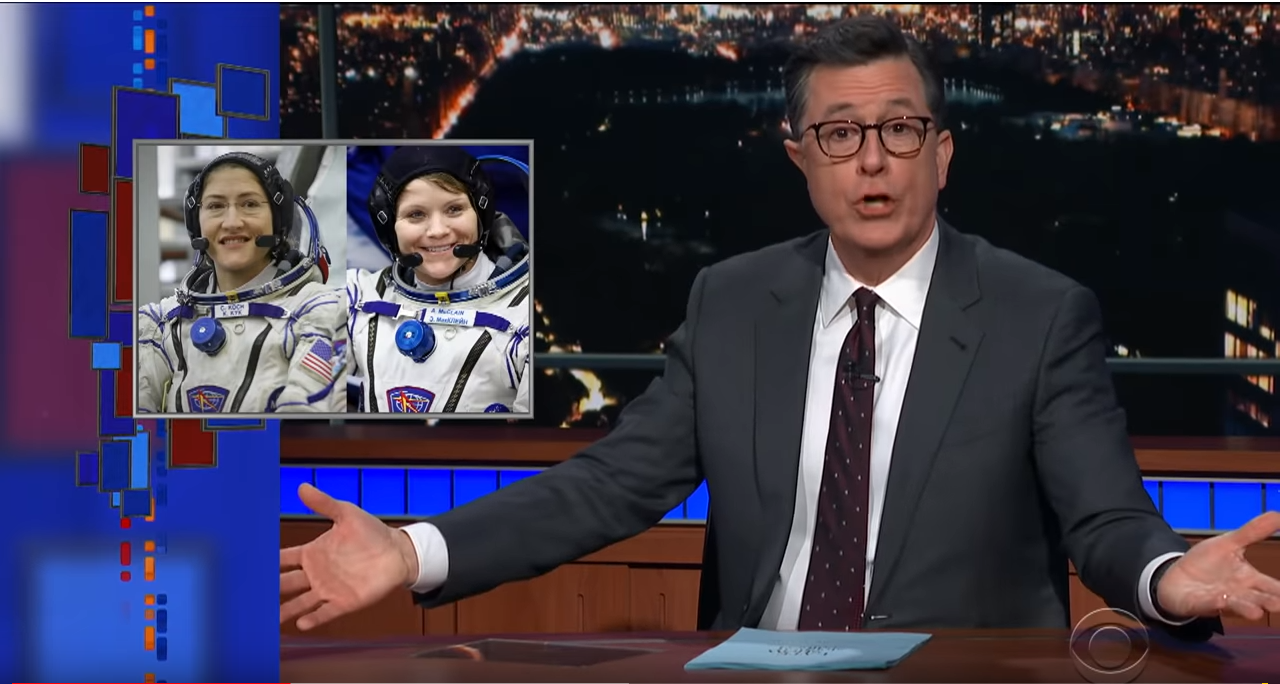 
"Huh" is all you can say about the
stories on LSSC's MEANWHILE
by Nathan'ette Burdine: April 16, 2019
Tweet
Follow @nbnylemagazine

“Huh” is all you can say about the stories on The Late Show with Stephen Colbert's (LSSC’s) special segment "MEANWHILE."

Y’all know, stories like NASA being able to send a man to the moon but not having enough space suits for an all-female spacewalk?!

The funny thing about that is NASA knew, from the get go, that they wouldn’t have enough space suits for an all-female spacewalk because all they have is one medium, one-size fits all space suit for the women folks. NASA even told everybody, “only one is readily available.” So yeah, that.

Speaking of that, some folks on a show call Tik Tok decided to show a grown man riding a bicycle, on a well-manicured yard, behind a miniature pony. Some people.

Another human who can be classified as some people is Zack Snyder, the director of the movie Batman vs. Superman.

Snyder is all sore over folks telling him not to tell their children, “Batman kills. Superman kills. Get over it.”

You can’t go around telling the children that Batman and Superman kill folks. We know they don’t, but the children don’t.

Batman and Superman are the kids’ heroes. Batman is who the kid wants to be during Halloween, while Superman is who he is when he’s sleeping, having his good night dreams.

Snyder telling a kid to, ‘Wake the fuck up,’ to who his superheroes are may lead to the kid going to get his He-Man size pappy to beat Snyder the “fuck up.” You can’t go around here telling folks how to see their superheroes. They’ll tell you a thing or two, just ask China.

The Chinese government is getting a headful after they decided to show the movie Bohemian Rhapsody without all the Bohemian and Rhapsody in it.

Everybody knows that Freddy Mercury would like at Brad Pitt before he did Jennifer Aniston. Ain’t nothing wrong with it. It was just who Mercury was. He was all about Mars and not about Venus.

Since we’re on the subject of planets, let’s talk about Verizon. The folks over there at Verizon, in Philadelphia, decided to suspend one of their workers who got a cat off a pole.

I have to tell y’all, now, it took the worker 12 hours to rescue the little feline. The 12 hour delay is not why the worker was suspended, though. He was suspended for rescuing the cat.